Observation of the environment by telescope 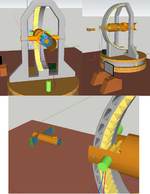 3D model of the RO telescope

This project discusses the making of a a DIY (do-it-yourself) variable magnification telescope for observing the environment/wildlife. For this, a do-it-yourself non-refractory telescope mounted on a gimball structure and equipped with variable magnification has been designed. The telescope is given a camera behind the lenses and the gimball structure is remote-controlled using a screen and buttons (rotatable by means of electrical motors). With this setup, the observation of the environment is not only more comfortable, but you are also able to see much more wildlife as the observation post is totally silent, and animals would also not be able to smell the presence of an observer.

Commercial units already exist for this but they do not would allow a very large amount of magnification (large enough to be able to see animals as large as a squirrel or bird at 500 to 1000 or even 1500 meter ) and they are also a lot more costly.

The first system uses optical zoom, the second uses only digital zoom (and would thus also require a better image chip, ...) The chip to be used (definitly for the second system, perhaps the first as well) would be a digital SLR-chip; the image feed would be transferred via RGB, component, S-Video or HDMI) cable to a television. The gimball to be used would be controlled by BBAstroDesigns' servo controller.

So far the basic system setup; next for the lenses/filters:

With commercial camera's, there are a great amount of filters/lenses used; as I understand because of the fact that the colors are otherwise a bit off. I however prefer to just make the telescope as simple as possible (with the least amount of lenses) and allow the colors to be a bit off, yet keep it within a acceptable limit.

Perhaps another thing that can be added is night vision; so that wildlife movement can also be followed at night (albeit at a more limited range). Types of wildlife appearing at night are different from those during the day, so this is a very intresting/worthwhile addition. I read an article in Elektor recently (december 2010) that explains that webcams (and thus also more complicated telescopes I imagine) can be easily converted for nightvision. All that is required is to not have an infrared filter on the webcam (and/or this needs to be removed) and to add infrared leds (or in our case a infrared leds floodlight). An additional microphone lastly would also be useful.