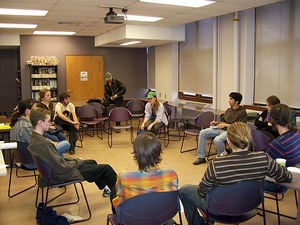 Open Sustainability Network Mid Missouri was a success! Thanks to Lonny, Nick, Kat, Mitch and myself for making it possible. Gwynn hall was a great location and served our purposes well. It was fun teaching open space to all these folks, as well as disseminating the idea of how open sustainability, knowledge sharing, and community currency can play so well into community building. Everyone had a great time and looks forward to future meetings of OSNMM and realizing their deliverable goals as decided in respective groups.

Lonny opened it up with a very informative and engaging presentation with a fresh audience. The focus was on rainwater collection in Eureka, CA and how collaboration via knowledge sharing, open source designs, networking and organized community efforts can provide a robust medium for creating sustainability.

Nearly everyone posted at least one item in the marketplace, and most of them blended extremely well to create 3 cohesive rooms of activity.

Talk about street theatre as per security cameras and engaging the community in dialogue about it.

This could be an interesting way of organizing a community based network to take on an important issue, and to collaborate with an international movement which satirizes such affronts to comfort in public spaces.

Also, bike powered machines based on Appropedia posted designs with a local twist. Talk about taking on a concrete project and running with it, documenting it and possibly hosting workshops to disseminate the knowledge and practice.

The idea is to create a bike that can be rode as well as provide power around town, and to finish it before earthday for demonstration. Different local groups were suggested as possible stakeholders

Talk about rooftop gardening, green roofs, energy efficiency on campus as per lighting. Broke off to room one and two. 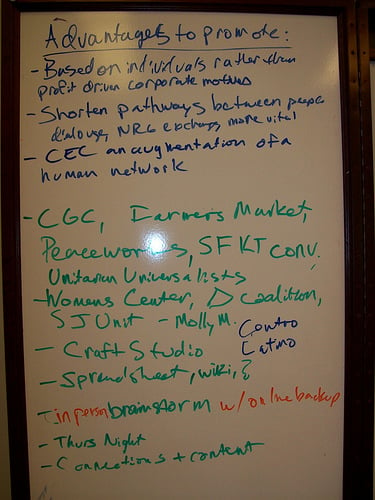 Focused mostly on CEC, Local Economy, Inclusivity, and bolstering the CEC and its outreach efforts.

Began with - why alternative economy? And what principles it should be founded upon, and how the Columbia Exchange Circle is oriented towards those principles. Then, how CEC can promote advantages we brainstormed, such as:

Delivery of these advantages depends on the effectiveness of our outreach and inclusion efforts, which we gave some shape and form via loose planning. A brainstormed list (forthcoming) of groups and associations to contact will emerge strongly from the CEC meeting we are planning for the 19th of march (thursday).

Regroup, Next Steps and Deliverables (and how you can become involved!)[edit | edit source]

We gathered back up and gave descriptions and at least one deliverable goal from each meeting.

Further plan outreach efforts and brainstorm groups to contact, methods of contacting and how to spread the word, and to promote advantages of the system Organize a swapnic soon (where people bring something to exchange and we have a picnic) Also, regular conferences with guest speakers would be nice