Since wastewater discharges containing nitrogen can be toxic to aquatic life, cause oxygen depletion and eutrophication in receiving water, reducing nitrogen level from the discharges is necessary. The most common and important forms of nitrogen in wastewater and their corresponding oxidation state in the water/soil environment are ammonia (NH3, -III), nitrogen gas (N2, 0), nitrite ion (NO2, +III), and nitrate ion (NO3, +V). In most modern wastewater treatment plants (WWTP) nitrogen is removed by biological nitrification/denitrification process. However, recently discovered anaerobic ammonium oxidation (anammox) process could offer another alternative for N-elimination. With both applications 85 – 90% nitrogen removal can be achieved, but there are considerable differences in terms of sustainability. 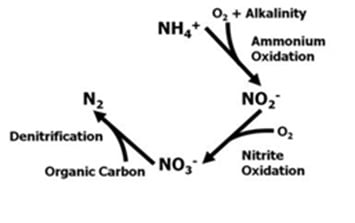 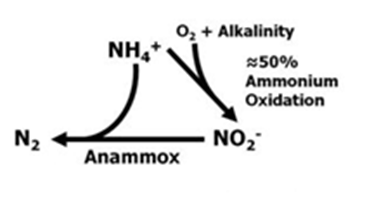 Comparison of nitrification/denitrification with partial nitritation/anammox in terms of sustainability:

1. The anammox process allows reduction of oxygen and sludge production

2. There is no need for organic carbon addition for anammox process – no carbon footprint

3. There are no gaseous intermediates produced during anammox process while during denitrification nitric oxide and nitrous oxide are produced (greenhouse gases, ozone depletion)

4. The total net energy consumption for anammox process can by reduced by 50%

5. The equipment capital cost can be cut