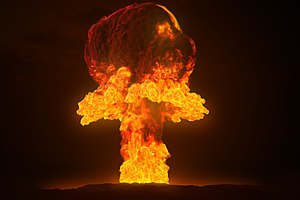 Many releases of nuclear material have occurred around the world, but the threat posed to human health by those releases can be quantified.[1] Quantitative analysis reveals that when evaluated on the basis of deaths per gigawatt-year of electrical power generation, nuclear power is safer than fossil fuel energy sources and nearly as safe (within 2 deaths per gigawatt-year) as the conventional renewable energy sources. When expressed in terms of expected deaths per year at a national scale, nuclear reactors are many orders of magnitude safer than roadways and other widely accepted technologies. Advocates of nuclear power have argued that modern designs with proper safety considerations are failsafe[2] or at least extremely safe, without the fundamental flaws in design and operation of earlier plants, particularly the Chernobyl plant.

Several factors contributed to the Fukushima I nuclear accidentsW

On Three Mile Island in 1979 there was a partial core meltdown. Estimates are that the average dose to about 2 million people in the area was only about 1 millirem. To put this into context, exposure from a chest x ray is about 6 millirem. Compared to the natural radioactive background dose of about 100 to 125 millirem per year for the area, the collective dose to the community from the accident was very small. The maximum dose to a person at the site boundary would have been less than 100 millirem.[3] The Kemeny Commission Report concluded that "there will either be no case of cancer or the number of cases will be so small that it will never be possible to detect them..[4]The public on the other hand would blow this incident way out of proportion. This is largely because a popular movie came out weeks before called The China syndrome that put a negative connotation on nuclear energy and how its run.[verification needed] 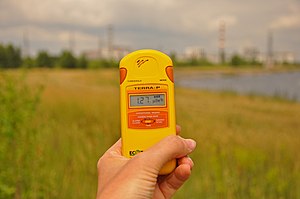 Dosimeter is a tool that measures radiation. In this image the photographer is in the Chernobyl Exclusion Zone using this tool to convey how the land is still poisoned by radiation to this day.[5]

The Chernobyl Disaster was a nuclear reactor accident at the Chernobyl Nuclear Power Plant in Ukraine. It is considered to be the worst nuclear power plant disaster in history. Four hundred times more fallout was released than has been by the atomic bombing of Hiroshima. It caused 56 direct deaths (47 accident workers, and nine children with thyroid cancer), and estimated that there may be 4,000 extra cancer deaths among the approximately 600,000 most highly exposed people. This huge disaster could have been easily avoided had the cooling rods in the reactor didn't act as a catalyst in the nuclear reaction.[verification needed] Another cause of the failure was the water channels that run through the core needed a more even distribution of water.[6]