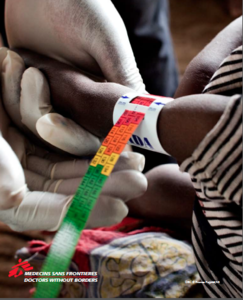 The World Health Organization estimates that there are 178 million children suffering from malnutrition across the globe, 20 million of which are suffering from severe acute malnutrition. Of these 20 million severe cases, only about 3% receive the lifesaving treatment they need. Increasing the speed and scale of diagnosis will allow health workers in low-resource settings to treat more patients.

The middle-upper arm circumference (MUAC) band simply loops around a child’s arm to allow for rapid screening of malnutrition in children less than 5 years of age. The bracelet, in conjunction with weight and height measurements, is pulled snug on the patient’s arm to indicate the malnutrition level of the child. Arrows pointing to green means adequate nourishment, yellow means at risk, orange means moderately malnourished, and red (a circumference of less than 110 mm) indicates severe and acute malnutrition. Once diagnosed, further treatment steps can be taken for the patient.

The MUAC band has been implemented in Doctors Without Borders sites across the world.