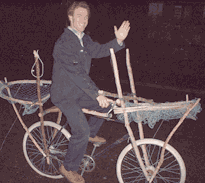 Load rack for bicycles, to be made on the spot. Bicycles are used for transporting bulky and heavy loads. It is trickey to do this in a way that it is still possibe to pedal the bicycle. In practice sometimes special racks are permanently attached to the bicycle. Such racks may hinder the more normal use of this bicycle. Moreover normal bicycles are not build to take heavy loads over rough roads.

Special bicycles for heavy loads are not generally available. An alternative could be a load carrier characterized with the following: the load does not rest on the frame of the bicycle, but is transferred directly to the wheelaxles; it is easy to mount and remove the load rack; such a load rack can be made by the user and adapted to the load to be transported. The load rack should not be in the way to push the loaded bicycle or to ride it.

These straps are made by winding some thin wire around the frame and axle and twisting it into a loop.

In each strap fits the tapered end of a straight stick roughly one and half a meter long.

For the load rack over the front wheel, these sticks are tied with a strip of rubber to the steering handle.

For the load rack over the rear wheel, the two sticks are also mounted in the loops attached to the rear wheel axle, then higher up with rubber strips to a T-shaped wooden extension strapped to the frame under the saddle.

Any basket, bag, netting, or platform can be attached to the sticks, that support the load in the most practical way.

This choice is left to the user.

After use, only the wire loops remain attached to the bicycle frame for future use.

The sticks and the T-frame are removed. On the way back from the market, these parts can be tied in a bundle to the side of the bicycle.

It is possible to make a luggage carrier from bamboo.