What is ‘LikeMeat’?[edit | edit source] 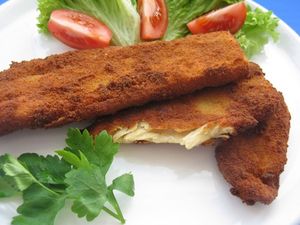 LikeMeat is a 2-year research and development project that began in 2010. The goal of the project is to “enable small and medium sized enterprises to develop meat analogues with excellent texture, juiciness, appearance and aroma having high consumer acceptance”. [2] There is a large group of people working on this project, including university scientists and 11 different food companies, and it is being funded by EC's Seventh Framework Programme. They are developing a way to create a new type of meat analogue that is made from 100% plant-based ingredients and still feels, tastes, and even smells like real animal meat. They aim to make this ‘meat’ have a long shelve life as well as an affordable price that is no more expensive than real meat currently is.

“Meat analogue” is another name for imitation meat. The majority of meat analogues sold in stores today are made from soy proteins, wheat gluten, and/or tofu. The first meat analogue was invented by John Harvey Kellogg in 1895. Kellogg is best known for being one of America’s greatest health promoters and the creator of peanut butter. What most people don’t know is that peanut butter was actually invented as a meat alternative to provide people who couldn't eat meat with protein. It was intended to be a peanut-based cutlet made by grinding nuts and mixing the paste with water and starch, then steaming it until it was ready to be seasoned to taste like meat. [3] Since then, people have found many new ways to improve and expand the production of meat analogues. You can find alternatives for everything from hotdogs to ground beef to cheese! The only problem is that many of these products contain eggs, dairy, or other animal ingredients not suitable for vegans, lactose-intolerant people, and others with dietary restrictions. LikeMeat is going to change this.

Why is this such an important breakthrough?[edit | edit source]

There are two main reasons that make this a very exciting and important breakthrough: the first is the people mentioned above with restrictions on their diet. Many people cannot consume animal meat or byproducts due to their religion, morals, health conditions, and/or lifestyle choices. LikeMeat is completely plant-based and the scientists working on it have put together a variety of recipes with a variety of different vegetables and plant ingredients in order to suite all different types of dietary needs. The second reason is the environment. There are currently more than seven billion people on planet Earth, and our population is growing at an unbelievable rate. That number is estimated to reach 9 billion by the year 2050. This will require 70 percent more food production than what is being produced now. [4] Producing meat analogues has a far less devastating effect on the planet than the production of real meat. A recent analysis of a widely cited 2006 report by the Food and Agriculture Organization of the United Nations shows a 33 percent increase in the worldwide greenhouse gases (GHG) caused by the mass production of animals raised for food. According to the same study, Methane’s impact on global warming is 23 times worse than that of CO2, and Nitrous Oxide’s impact is almost 300 times as damaging. The mass production of meat leads to the emission of tons of these damaging gases directly through cattle flatulence, animal excrement, and the transportation of both live animals and the carcasses of the ones slaughtered across the world. These gas emissions are also generated by the manufacturers of fertilizers used to grow feed-crops, and by the factories used to churn the meat. In order to have feed crops, we must cut down forests. And in order to keep these animals alive, we must give them large amounts of water. Cattle require around seven kilograms of grain and anywhere between 13,000 and 100,000 liters of water to produce just one kilogram of meat. [5] Because of this, the meat industry is largely responsible for much of the world’s deforestation and water shortage.

The production of a plant-based meat analogue, on the other hand, requires 7 times less water! And the grains skip the wasteful process of going through the animal before being cooked. (It takes between 7 and 16 pounds of grain to feed a cow to make just one pound of meat, when we could be making more food with all 17 pounds! Think of the energy saved!) [6]

It is believed that a simple switch from a meat-based meal to meat analog meal saves a total of around 26 billion tons of CO2-eq. [7]

How its made[edit | edit source]

The machine that has been built to create this new meat alternative is able to produce 130-150 pounds of meat substitute per hour. The ‘meat’ comes out as a centimeter-thick substance that can be cooked and flavored as desired. This machine is no larger than the size of two ping-pong tables and uses an innovative process to cook the grains and proteins for the cutlet: The ingredients are boiled and then slowly cooled down, and in the process, their proteins begin to form chains and result in a fibrous, juicy texture. [8]