Refugees that have escaped from brutal prison camps in North Korea are in desperate need of assistance. 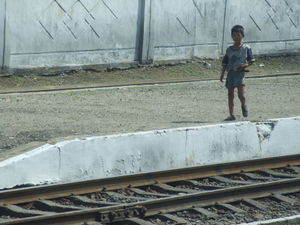 A young boy walks along train tracks in North Korea.

The creation of the grassroots organization, Liberty in North Korea (LiNK),resulted in 19 North Korean refugees finding safety and settlement in 2012. The organization also works hard to bring awareness to the issue by writing articles and providing information to the global community. [1]

North Korea's repressive regime denies its people fundamental human rights. Among the human rights abuses found are: prison camps, public executions, and collective punishment(punishing the whole family, sometimes for several generations), all without rule of law or due process. There are five political prison camps holding an estimated 150,000 to 200,000 inmates. Oftentimes a prisoner is born into a camp and is made to serve a life sentence. There is also an information blockade, chronic food shortages, and poor public health. There are an estimated 30-50,000 refugees in China and over 24,000 refugees in South Korea. Those who survive the escape to South Korea are given an automatic South Korean citizenship. In China the situation is particularly bad for women, as 70-80% become subject to sexual trafficking. There are 10,000 stateless children born to refugees in China. [2]

The grassroots organization, Liberty in North Korea, has rescued 40 refugees total to date. They have helped to settle 77 refugees. They have raised a total of $532,592 through grassroots efforts. The organization is working to bring awareness to the situation by touring with film screenings and talks,sharing stories of North Koreans, and working to evolve the discussion of the crisis. Of course, change will ultimately have to come from within North Korea, but the organization has a vision of liberty in North Korea and aims to help empower North Koreans toward this goal. The blockade of information that the authoritarian regime maintains in order to secure their control over the people is slowly crumbling. The flow of objective information and ideas from outside their own country is already empowering North Koreans to judge the situation for themselves. [3]

Page data
Retrieved from "https://www.appropedia.org/w/index.php?title=Liberty_in_North_Korea&oldid=625002"
Cookies help us deliver our services. By using our services, you agree to our use of cookies.
Categories:
Maintenance categories:
Comments
Privacy policy · About Appropedia · Disclaimers · Mobile view · Content is available under CC-BY-SA-4.0 unless otherwise noted.
</html