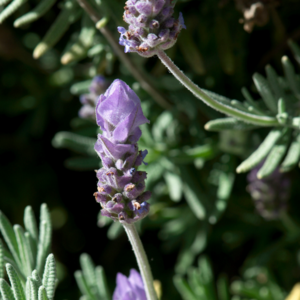 Originally from the Mediterranean region, lavender is now found widely distributed around the world, including the Middle East, north tropical Africa, parts of Asia and India, South America, Australia and New Zealand and North America. The term lavender is derived from "lavare", which was the Roman term for "to wash" because it was used to scent washing and bathing water, as it continues to be used to this day.

Lavenders are perennial and aromatic. They all have shrub-like growth. The size of lavender varies widely depending on soil quality, location, weather conditions and the climate.

Lavender is used by many industries from cottage craft through to distillers and perfume manufacturers. Its fragrance is highly admired and sought after around the world for many applications including as a scent, a culinary addition, herbal remedies, insect repellent, first aid uses and for garden beautification. It is frequently added to scented sachets and potpourri and is used as a wardrobe or drawer scent. Lavender is added to many cosmetic preparations including lotions, skin creams, shampoos and hair conditioners.

Lavandula angustifolia is one popular species of lavender, cultivated in France and elsewhere. It needs full sun to grow, a soil temperature around 21ºC and sandy, well drained soil is the best type of soil for growing. Germination takes 2 to 4 weeks. Young plants are strengthened if the first year blooms are cut off.

Most lavenders are easy to grow and will tolerate variations from their usual preferred growth environment. They don't usually need a lot of attention, although weeding is vital and soils should be waterlogged. If lavender is grown in a cold climate, it requires good mulching in a well-drained soil to prevent it from suffering from the cold. Sunlight is vital for all types of lavender.

Lavender is reasonably hardy but when problems happen, here are some of the possible reasons:

Lavender has been shown to contain anti-bacterial properties and is also strongly anti-fungal. It can also be used as part of a holistic strategy to ward off insects, by including it as one ingredient in insect repellent and bite soothing lotions.

Always do a skin patch test before using lavender on your skin, in case of an allergic reaction. Rather than applying it neat to skin, it is recommended that you add it to a carrier oil such as olive, coconut or sweet almond oil. About 5 drops lavender oil to 2 tablespoons of carrier oil should work well.

Lavender has a variety of uses in the household or small business. These include:

Mix together all of the ingredients to combine well. Pour into sachets or cloth bags and keep with clothing and linen to repel moths.