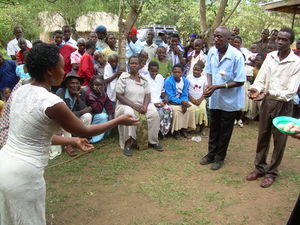 Kibale Association for Rural and Environmental Development (KAFRED) is a community-based organization in Western Uganda that aims to preserve the local environment "while advancing health, education and economic growth in the local community." KAFRED has won the Equator Prize in 2004 and 2010. Founded in 1992 by American Peace Corps Volunteer, Mark Noonan, and six community members, the organization uses ecotourism and other environmentally sustainable businesses that promote the conservation of biological diversity and development of the local community within the Bigodi Wetlands Sanctuary. [4].[1] [5].[2] Tourism is considered Uganda's second most important export after coffee. The Uganda Tourism Board lists Ecotourism as the "Featured activity" on their site, Tourism Uganda. [6] [3] [7] [4] 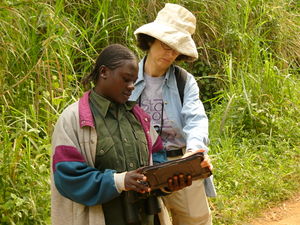 KAFRED has hired 6 guides from the local community to guide tourists in their most economical business, ecotourism. [1].[5] 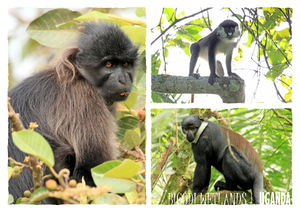 Uganda's unstable legal regimes up until 1986 lead to a number of problems (in all of Uganda) including:[7]

In 1995, a meeting including KAFRED members, heads of households bordering the wetlands, women leaders, local council representatives, district officials and facilitators from the National Wetlands Program (NWP) and the Kibale and Semliki Conservation and Development Project (KSCDP) was held to help establish village by-laws governing the use of Bigodi Wetlands. These crucial by-laws implemented how close human activities can partake to the swamp's edge. It also regulated firewood collection, grazing practices, and fruit gathering, in addition to banning digging trenches to drain the wetlands and burning within conserved areas. [9].[8]

The Makerere University Biological Field Station and KAFRED are working together to conduct research on various primate species including the Black and White Colobus, Red Colobus, Baboon, Grey Cheeked Mangabey, Red Tailed Monkey, Blue and Vervet Monkeys, and L'Hoest's Monkey. KAFRED is currently assessing possible impacts on primate numbers by counting these species within tourist trail areas. There are also over 200 bird species that inhabit the Bigodi swamp, including the rare Great Blue Turaco which KAFRED has dubbed as their logo. [10].[9] 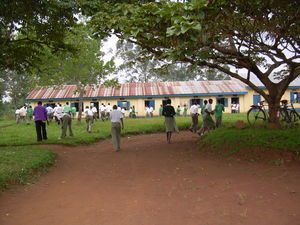 Construction on the Bigodi Secondary School began in 1993. The school now has around 150 students attending. [2].[10] 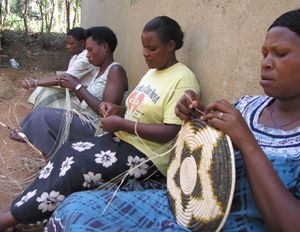 The Bigodi Women's Group sells "baskets, mats, bags, jewelry and other crafts at the Wetland Sanctuary office in Bigodi trading center, at the Kanyanchu Visitor Centre in nearby Kibale Forest National Park, and worldwide through export." [3].[11]

Revenues made from tourism and other means are spent on community projects such as education, health and sanitation. KAFRED hires primarily from within the local community except in cases where there is need for a specific skill. KAFRED has hired 14 teachers, 6 guides, 2 cooks, 2 security guards and 3 cleaners. Teachers and guides receive training through both KAFRED and Makerere University. The Bigodi Women's Group and Peanut Butter group sell their goods through KAFRED at the Wetlands Visitor Center. Locals can afford to buy a wider variety of local grown food thanks to the high demand brought on with the influx of tourists, leading to a healthier diet. The number of permanent houses has increased from two in 1992 to over 20 today. KAFRED has gone from hosting 1000 visitors in the '90s to 3,500 in 2008. What most people consider to be the most notable achievement, however, is the construction and management of the Bigodi Secondary School. Prior to the Bigodi Secondary School, the nearest secondary school was in Fort Portal. There are only two buses per day and if you missed them then that meant a seven hour walk home. [11].[12] [12].[13] [13][14]