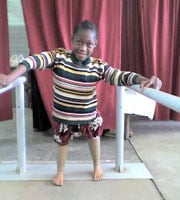 Quality of life is dependent on an individual's ability to perform his/her daily tasks. Moreover, in developing countries, many professions are highly dependent on physical activities. Of course, these regions are the most affected ones by phenomena that hinder their physical performance, such as traffic accidents, wars, and natural disasters. Therefore, a low-cost, easy to manufacture and to implement technology that can help people with disabilities has a large impact on the quality of lives of millions globally. Prosthetics in this venue are among the most targeted and tried technologies that can help improve the lives of millions.

In the light of importance of prosthetics for those in most need, about 40 years ago, the Jaipur foot was introduced in India. The Jaipur prosthesis is low-cost, durable, waterproof, and can be used with or without shoes that is made and sold for less than 20 USD. In most cases, distribution and implementation is for free. The Jaipur foot, named for the town where it was designed, is flexible along multiple axes, which allows natural movement of the foot. The Jaipur foot technology is based on traditional craft using small local production methods, and has already helped over 900,000 amputees in developing and landmine-affected countries.

This device has been used most extensively in India but is expanding worldwide.