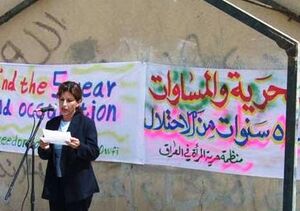 Sice the 2003 American led invasion of Iraq, the country has been torn by civil war, "sectarian cleansing", a massive refugee crisis, and a surge in violence against women. With the help of oraganizations like MADRE and OWFI, many of the nations youth, Sunni and Shia alike, have rallied together through art, music, and poetry to promote peace.

MADRE is an international organization that works together with other community based organizations to promote a wide variety of human rights including women's rights, health, and education. It began in 1983 when a group of women travelled to Nicaragua after the US led Contra war. Kathy Engel, MADRE's founding director, envisioned a completely women run human rights organization. Their mission: to raise public awareness of the worldwide effects of US foreign policies and actions. [1]

The Organization of Women's Freedom in Iraq (OWFI)was founded in 2003. It grew out of the Independent Women's Organization (IWO) that began in 1992 in northern Iraq to help save women from the brutal violence that has been perpetrated against women including the practice of "honor killings". They have provided shelter legal services and even armed protection for women. [2]

"There is a huge emancipatory and secular force in this society that aims at achieving freedom and a better life for women." - OWFI founding statement

OWFI hosts what they call FreedomSpace gatherings, public performances where people share their poetry and music and art. Even though these gatherings have been banned by Islamists the people persist in spite of the danger. The first FreedomSpace gathering consisted of only 30 participants. At the most recent event there were over 200. Organizer say that they are pleased with the program.

"Sunni and Shiite youth are coming together in Baghdad to create art and to bridge the divide between their communities. Young people have a safe, demilitarized space to socialize peacefully, and create alternatives to violence. Young men and women are learning about women's rights, human rights, and the centrality of women's rights to a truly democratic society. Sectarian violence is averted as hundreds of unemployed young men—who are the primary recruits of the Islamist militias—are putting their energy into ArtAction and the progressive alternative that it represents. Young women are given leadership opportunities as coordinators and hosts of FreedomSpace gatherings and are receiving weekly training in youth movement building, grassroots organizing, and outreach methods. These gatherings are now one of the only public spaces in Baghdad where women are visible, powerful leaders. Young poets are benefiting from bi-weekly seminars to support their writing skills."- MADRE [3]

How You Can Help[edit | edit source]

MADRE is deeply involved with promoting the human rights and womens right all over the world. They need your help and you can help by: