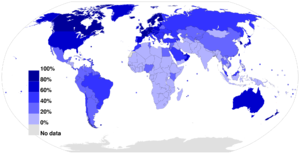 The amount of internet users can be made higher by having the consumer (assuming he lives in an area that has access) share one internet access over different computers/users. This can be done by internet sharing via WiFi or WiMax.

In addition, people in developing countries can also use the latest smart phones to access the internet. Users that are skipping laptops in favor of smart phones are called Leapfroggers. Present-day smart phones have the ability to display (html) websites.[1][2]

Internet access is distributed by major companies from specific areas/cities. These areas/cities are generally heavily populated, so that sufficient revenue can be attained by the company sharing the internet access over its customers. Generally, the system relies on submarine cables for its major data arteries and further distributes it over the many houses in an area using land-based optical fibre cables.

Although this, in essence, allows to share the internet access to anywhere within a continent, there are actually reasons why not sharing internet over an entire continent is a good thing:

The digital divide is being crossed faster in developing countries than what happened in the past in the developed world. Some ways on how people overcome the fact that they don't have internet access themselves (on their computer) is

Once such a system is set up, it is called a Sneakernet. Sneakernets are generally used to exchange emails, but any file type can in essence be shared. USB Flash Drives are cheap (about 3 US dollars in 2007) or available by donation.

Page data
Retrieved from "https://www.appropedia.org/w/index.php?title=Internet_access_in_developing_countries&oldid=624918"
Cookies help us deliver our services. By using our services, you agree to our use of cookies.
Categories:
About Appropedia · Policies · Contact · Content is available under CC-BY-SA-4.0 unless otherwise noted.