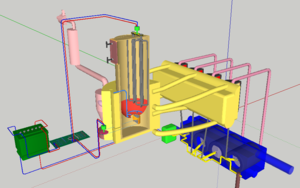 Figure 1: A wood gas generator with thermal energy recovery (via a stirling motor) can allow up to 70% of the thermal energy of the burning of wood to be used. A system like this works by using 2 separate electricity generators (1 on the gasoline IC-engine, another on the Stirling engine)

The efficiency of a fuel conversion system can be improved by combining 2 or more engines together (this being known as a "combined-cycle system"). This works in that waste heat energy from one engine is used as a "fuel" for the other. The second engine in effect hence harvests energy from the first engine. It hence differs from Cogeneration & Trigeneration as these latter types simply spread waste energy in rooms (space heating) and do not use the heat to power an extra engine (ie to provide mechanical work or electricity).

This article focuses on what combined-cycle combinations can be used, and compares the combinations of engines with each other. Note that the combinations electric engine-heat engine have not been included as they don't harvest waste energy from each other. Instead, this engine combination is just more efficient in that in certain areas (ie crowded areas/cities) the full motor efficiency of the heat engine can't be attained. This, due to the many stops, starts, decreases in motor speed, increases in motor speed, ... Electric motors are generally a lot better in this task, making the use of this motor in these environments useful and increasing the efficiency of the system as a whole.

The compound engine, although considered to be a single engine, can also be seen as an assembly of piston steam engines. This as it uses several pistons, one after an other. Unused steam energy in the steam coming from one piston is reused in the next piston. The system though is not generally more efficient than 15% (same efficiency of a single piston steam engine), as through careful dimensioning of the water quantity, size of the heater tank, ... no surplus waste heat energy should exist that could be used by subsequent pistons.

An internal combustion (IC) engine (gasoline or Diesel) can be combined with a steam engine so that waste heat energy from the IC engine can be used by the steam engine. The efficiency of this is 30% (gasoline IC engine) or 35%-50% (Diesel IC engine) + 15% (steam engine) = 45% to 65% Some commercial systems have already been made.[1]

Also note that the high efficiencies can only be reached when they attain their optimal speed/load ratio, see Electric and hybrid electric vehicles