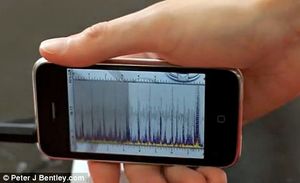 While regular stethoscopes can pick up heartbeats, they do not record the data automatically; stethoscopes are also an extra device for doctors to carry around.

The iStethoscope is a mobile app able to pick up a heartbeat by using an iPhone’s built-in microphone. It can record and play back eight seconds of heartbeat, and display a phonocardiograph and a spectrogram, which can then be emailed to a specialist. This allows doctors to have the capability to accurately hear a heartbeat at all times without having to carry around a stethoscope. It also would allow less trained medical workers to record their patients’ heartbeats and send it to a doctor for consultation.