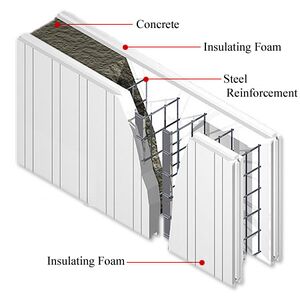 An Insulating Concrete Form is a lightweight, expanded polystyrene form that interlocks with other ICFs to create a cast for exterior concrete walls.[1] As the forms are installed they are connected with plastic ties, and rebar is placed across the empty spaced in the forms to reinforce the structure. Once the forms are all in place in the shape of the structure, the cavity is filled with concrete. The forms remain in place after the addition of concrete and the foam provides about four inches of thermal insulation for the 4-6 inch concrete walls of the building.[2]

"On the job site, construction is quick and simple, says Joseph Lyman, executive director of the Insulating Concrete Form Association (ICFA). "For large commercial jobs, speed of construction is one of the biggest reasons for using the technology." [2]Homes made with ICFs are easier to construct than wood frame homes because the nature of ICFs rolls five steps of the building process into one (structure, insulation, vapor and air barriers, sound barrier, fastening strips) [3] so construction of the building generally only requires one crew instead of the average three.[4] Homes can be built in all seasons and conditions when using ICF walls because the concrete is protected by the forms, so the curing conditions are nearly always ideal which gets rid of problems encountered with purely concrete walls that haven't cured properly such as cracking, leading or shifting and makes the ICF wall more structurally sound.[5] [6] There is very little construction waste because the forms are generally used in their whole form and not cut up, the materials can be stored on-site and any forms leftover can be reused for other buildings.[2]

-The foam insulation and thermal mass of concrete help even out temperature swings [2], meaning the walls of the house keep the indoor environment little warmer when the outdoor temperature drops, and keep the house a little cooler when the outdoor temperature is hot.[7] This is because the range of insulation values for ICF walls range from R-17 to R-26, compared to R-9 to R-19 for wood-framed houses.[6] Fewer drastic changed in temperature reduces the need for frequent heating or cooling. The savings comes twofold in that the heating and cooling equipment can be designed smaller which brings down initial construction costs by $500 to $2000,[8] and they can be operated less often saving on utility bills. Since houses with ICF walls can use up to 44% less heat energy and 32% less energy for air conditioning [8], the energy savings on monthly bills can range from 15 to 35% less than traditionally built homes. Energy savings generated are up to 50% compared to traditional building on monthly bills.[5]This means that, according to the Insulating Concrete Form Association, "a typical 2000 square foot home in the center of the U.S. will save approximately $200 in heating costs each year and $65 in air conditioning each year." [8] "A study published by the Portland Cement Association show that over the life span of a house, ICF has a reduced CO2 burden by 220,460 lbs versus wood-frame construction."[5]

Concrete does not require much maintenance and is not susceptible to rot, decay, or attracting insects like wood because its components are not biodegradable.[6][1] The durability of concrete could be seen as a negative in the long run, however in the short run its potential of decades of durability reduces waste in that a wood-frame doesn't have to be replaced and the ICF forms will not lose their insulative ability over time.[5][9]

Concrete obviously does not burn like wood, so a homes made out of ICF forms are generally rated up to 4 hours of fire resistance before failing structurally, contrasted with a wood homes that typically has typically a fire rating of about 1 hour.[10] Home insurance companies give discounts to homes made of ICF for fire and earthquake insurance because of a lesser chance of being affected by a disaster.[4] [1]

"ICF wall systems are rated to withstand extreme weather conditions, including tornadoes and hurricanes. They can endure winds in excess of 140 miles per hour.[1]

The structural capacity of an insulating concrete form wall can withstand greater structural stresses than wood or even steel frame homes.[11] Most ICF built homes are rated safe for earthquake zones up to zone 4.[1]

Wood and moisture an ideal environment for mold yet the concrete, foam and steel in a concrete wall system are not a food source for mold growth. Mold is not able to penetrate into the exterior walls of the house and cause unseen problems. However, other organic materials used inside the home such as drywall or carpet can harbor mold and should be checked regularly.[9]

"Concrete walls built with insulating concrete forms effectively buffer a home's interior from the outdoors. The thick ICF sandwich of a massive material (concrete) with a light one (foam) sharply cuts fluctuations in temperature, air infiltration, and noise. They keep the inside of a house more comfortable and quiet than ordinary wood frame walls." [12]

A lessened amount of draft from the outdoors due to the seal created by the tight-fitting foam forms and thick concrete wall helps keeps out outside air pollutants and allergens. This makes the indoor environment much healthier and easier to maintain because tests show that ICF homes have one-third the amount of drafty air infiltration as other types of homes.[1]

The solid construction of a concrete wall and insulating properties of foam on the inside and outside of the house reduces the sound travel from outdoors to indoors and between rooms. This means that the sound of highways outside or a slammed door inside doesn't transfer. Compared to a typical wood frame wall, only about one-quarter to one-eighth as much sound penetrates through an ICF wall.[12]

Living in an ICF built home is considerable for your health because the forms contains no CFCs or HCFCs, either in the manufacturing process or after they have been installed.[5]Concrete is also an inert material because it is made up of made up of natural minerals, and recycled materials.[4] It has been proven that ICF construction is the most hypo-allergenic building envelope option available.[9] The overall health impact of your home also depends on what materials you cover the foam forms with on the inside and outside. Alone ICFs are practically inert, but with the addition of certain paints, drywall, or sidings the health impact can increase.

The Federal Housing Association (FHA) energy efficient mortgage program is a potential source of funding available to buyers of energy efficient homes. The process requires that you get the home rated by the Environmental Protection Agency under the Energy Star program and if you receive 5 stars, which means that the home exceeds energy codes by 30%, you can qualify for the loan. The idea is that the lower monthly utility costs enables the buyers to stretch their debt-to-income ratio by 5%.[4]

The main component of the insulating concrete form is the foam created from expanded polystyrene (EPS). EPS was originally considered post-industrial recycled material from the development of oil. EPS can be easily reused to make more EPS, or the scraps can be recycled into "hangers, park benches, flower pots, toys, rulers, stapler bodies, seedling containers, picture frames, and architectural molding." [13] Arxx brand ICF bricks are made of 47% recycled materials by weight,[5]and 40% of Eco-Block forms are made of recycled materials.[4] Also, according to the PSPC, "American manufacturers have produced insulating concrete forms made with approximately 80% recycled EPS since 1993."

A life cycle assessment takes into account all of the resources that go into the resource harvest, manuracturing, transportation, implementation and disposal of a product. An important aspect of green building is comparing the long-term costs to conventional building practices in terms of savings. The life cycle assessment of ICFs balances the benefits and costs because insulating concrete form homes have durability that outperforms wood-frame houses.[2] The resources for creating a form are the waste products of another industry, the manufacturing process doesn't create much waste, transportation is optimized because ICF panels can be packed and shipped flat, there is also very little construction waste, the product will be in use for many years before being dismantled and

The cost of ICF walls is the main drawback of increasing their implementation. There are varying percentages of how much more constructing a home out of ICFs is than wood-frame construction. One estimate is that ICF homes cost about 2 to 5% more,[6] another states an increase of 1 to 8%,[14] and yet another suggests the cost may be 0 to 10% more[15] than wood-framed construction. The variation in estimates of cost increase are dependent upon manufacturers, availability of local building materials, and construction crew and structural engineer's experience designing and building with ICFs.[6]Another way to conceptualize the increase is that the average cost per square foot of an traditional home costs $60-100, building walls of ICFs adds $1.00-$4.00 to the overall cost.[16]

The increased costs of building can be easily recuperated through lower utility bills over the lifetime of the house. An example provided by Design Basics estimates that "a $200,000 30-year mortgage at 7% translates to $1330 payment per month. If building the home using ICFs added $8,000 to the cost of the home, the monthly payment would increase to $1,383. If the energy efficiency of the ICF home reduced heating and cooling costs by an average of $53 per month, the lower utility bills cancel out the increased construction costs." [15]

ICF walls are useful for all types of building designs, and the buildings often don't look any different than those erected with traditional building practices. Arxx ICF has a gallery of buildings built with ICF walls that range from single story homes to hotels, potato barns to schools, and cinemas to hospitals. Below are a few examples from their gallery.[3]

Insulating concrete form construction became popular in Europe roughly 30 years ago, and caught on in the U.S. in the 1990s [2]. ICFs have been gaining steam in the residential construction market during the last 10 years.[14] ICF building is approved by every major code agency in the U.S. and Canada. In addition, ICF has proven successful in every climate and region and concrete homes currently account for about 16 percent of home construction.[2] According to the Insulating Concrete Form Association, the use of ICFs has risen 73% over the past 5 years." [14] More builders are realizing the benefits of ICF construction and taking advantage of the cost savings generated by the ease of construction and marketability of the system's energy efficiency and durability.[2] As green building and LEED certification catch on in the construction world and become requirements in cities, contractors and builders will enjoy having conquered the learning curve and being able to make competitive bids.[17]