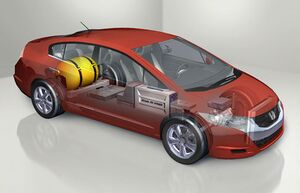 Many companies are currently researching and developing hydrogen cars. Funding has come from both private and government sources. Development is largely the result of interests in limiting the environmental impact of automobiles, as the only emissions of fuel cells vehicles is water. As long as the hydrogen is prepared without the use of fossil fuel input, the propulsion of a fuel cell automobile will have no contribution to carbon dioxide emissions. Hydrogen fuel cell cars also travel farther on a given volume of fuel than their gasoline powers counter parts.

The drawbacks of hydrogen use are: low energy content per unit volume, high tankage weights and storage pressures, and a lack infrastructure such as fueling stations. Many companies such as General Motors and the Ford Motor Company are also downsizing or abandoning their plans to develop hydrogen cars due to production costs and market uncertainty.

Most hydrogen automobiles cost about $400,000 and are currently only available as demonstration models in limited numberers on a lease system. There is an estimated 200 hydrogen-powered cars in the United States, mostly in southern California where there are "fast-fill" hydrogen stations available. Both Japan and Germany have announced plans to open 1,000 hydrogen fill stations in support of environmentally friendly development. London's deputy mayor, Kit Malthouse, announced plans to have a hydrogen taxi and bus system in operation by the 2012 Olympic Games.

The Honda FCX Clarity is a hydrogen fuel cell automobile that was released to the consumer public in 2008.[1][2] It is currently available for lease in Japan, Europe and Southern California. There is a total of 50 FCX Clarity leased in the US, 10 in Europe, and 10 in Japan. Honda believes it could start mass producing vehicles based on the FCX Clarity by 2018, but the number of available hydrogen stations is a limiting factor.

The FCX Clarity is produced in Japan on a dedicated assembly line in the Honda New Model Center. The fuel cell stacks are produced at Honda Engineering Co., Ltd. Honda hopes to produce 200 vehicles by 2010.

Hydrogen fuel cell vehicles, as stated, are incredibly expensive. Individual automobile drivers are unlikely to make such a pricey private investment, but governments and large corporations have been more willing to invest in the technology when it's utility can be enjoyed by the public. The Ecological City Transport System (ECTOS) project began in 2001 as part of the European Commission's endeavor to reduce overall emissions in Europe. Iceland seemed like a good place to start, considering its abundance of geothermal energy. As part of it's research into hydrogen fuel cells and under the direction of the European Commission, Icelandic New Energy (INE) entered into business with multinational energy corporations such as Shell, DaimlerChrysler, and NorskHydro,[3] the University of Iceland, and the University of Stüttgart.[4] These public buses proudly shuttled people around the city of Reykjavík from 2001 to 2005. After the ECTOS project was finished, a new project called the HyFLEET:CUTE project began, also sponsored by the European Commission. This project ended the following year, but the buses still run in Reykjavík. It is through these types of multinational, intergovernmental collaborations that such seemingly insurmountable goals can be achieved.

Hydrogen fuel cells generate electricity between the reaction of hydrogen and oxygen to make water. Hydrogen can be split from H20 using electrolysis. Since the energy used for electrolysis in Icelandic buses would be drawn from a grid that is run on renewable geothermal energy, this technology has proven to be highly efficient and emits no carbon.[4] In other contexts, the technology would be far less renewable were the energy to come from a coal fired power planet, for example.

Appropriate technologies, or intermediate technologies as they were first described by E.F. Schumacher in his book "Small is Beautiful", were meant to be bridging mechanisms between the poor of developing nations and the wealthy of industrial nations.[5] There is a similar relationship in the bridging of less efficient technologies of the current post-industrial era and the more efficient technologies of a zero-carbon era that we all hope for. Hybrid fuel cell vehicles that use hydrogen fuel cells in concert with batteries present an example of this type of bridge technology.

The Schatz Energy and Research Center (SERC) operates at Cal Poly Humboldt (HSU). In the years since its founding, it has made strides in hybrid bridging technologies. The University, thanks to SERC, now is home to a hydrogen fueling station that powers a Toyota FCHV (Fuel cell Hybrid Vechile), and a hydrogen powered, combustion-engine Toyota Prius.[6] Both vehicles operate at zero-emission and represent progress in moving toward increasing use of these types of technologies, thanks to funding from the the University and the California Department of Transportation, and research from (SERC). State funding and motivation will surely be the keys to unlocking success of hydrogen fuel cell vehicles. Their private use is still far too expensive.