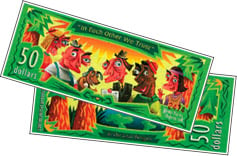 Community Currency is a means of exchange that has a localized value. This value is limited to a specific community, usually restricted within a geographical region. This structure keeps the wealth created by the exchange of goods and services within the local community -- it cannot be extracted or exported, or even really, benefited from by those whose primary allegiances lie outside of the community.

Most of us already use alternative currencies in many aspects of our life. Bus passes, movie tickets, gift certificates, tokens for paying food and drinks at festivals, CO2e-certificates under the Emission Trading System, LET's -- even tokens and tickets within video arcades -- are all used as a means of exchange for acquiring services or goods (although very restricted in where they have value). Coupons are used similarly, with value in potentially broader circles.

Scrip is an alternative currency much like our community currency. Unlike coupons, which only give you a discount on purchases made with US currency, scrip has an inherent value and can be used on its own. During the Great Depression of the 1930s thousands of kinds of scrip were issued by merchants, municipalities, and even chambers of commerce. Scrip today is typically issued by a company as a tool for fundraisers: a non-profit or a school will purchase the scrip at less than face value, and then sell it to their supporters at face value, thereby making a small profit while encouraging their supporters to purchase from the company.

Community currencies similar to our Humboldt project can be found all over the US and around the world. From Ithaca, NY to Tucson, AZ, and from Germany to Argentina, communities have benefited from a structure for exchange that prioritizes local sustainability.

FAQ #2 - Are There Other Local Currencies?[edit | edit source]

As we found in last issue’s FAQ, Community Currency is not a new idea, but it is not obsolete either. Quite the contrary, people the world over are creating currencies of different sorts to serve their needs. As a small economy, Humboldt County is in good company, part of a world-wide movement intent on creating healthy communities. Some of the different types of community currencies in use today around the world include the hours model, Local Exchange Trading Systems, and barter systems.

There are over sixty regions in the United States using their own monetary systems—the most well-known being Ithaca Hours. Started in 1991, this New York currency works on the hours model, which means that an hour’s work is used as the unit by which the value of goods and services are compared. Paper money is printed and used, which has the advantage of feeling “real,” highlighting local artists or landmarks. Ithaca Hours are issued by fiat, which refers to a type of currency whose value is guaranteed by the authority issuing it rather than by any external reference or backing.

Green Dollars in Peterborough Ontario has been one of the fastest-growing and most successful Local (Energy /) Exchange Trading Systems (LETS) Canada. There are more than 40 LETS systems across Canada and more than 250 in the U.K., nearly every EU country, as well as some in Australia and New Zealand. LETS operate by mutual credit system, a system in which the currency necessary to mediate a transaction is created at the time of the transaction as a corresponding credit and debit in the balances of the two parties. These systems, unlike fiat currencies, do not require any centralized money supply management.

Argentina’s barter system, Red Global de Trueque or Global Barter Network emerged at a time of heavy inflation when national currency was scarce. This practice was touched on last issue with the example of 1930s depression-era currencies. It is the biggest barter club network in the whole world with well over one million participants throughout Argentina. Each local group or nodo holds its own weekly market and from time to time they come together in larger regional markets. Mutuality, inclusiveness and sustainability shape the philosophy behind Red Global de Trueque. Most nodos issue new members with an initial amount usually 50 creditos, the unit of currency based on US dollars. This amount is considered an interest-free loan that will be paid back to the community in the form of goods and services.

The ECO and ECO-exchange rate system as created by YEE members during the European Youth Forest Action (EYFA) and used by the International (Youth) Environmental Organizations and many more, such as the members of Youth Environment Europe. The problem was that these organizations organized international training-courses etc. Imagine an international workshop in Sweden. For Swedish, paying 257 €/day is acceptable, but can be impossible to pay for by a person from e.g. Albania. And visa versa, when a workshop is organized in Albania, everything may seem ridiculously cheap for the Swedish participants. To overcome this, all was expressed and to be paid for in ECO's. To exchange money into ECO's, one has to consult the ECO-convertor. The ECO-Convertor uses an exchange rate taking into account the cost of bread, electricity, water, transport, average salary, etc. and out of that comes a weighted average conversion rate. That way, the "feeling" both the Albanian and the Swedish will have when offering each other a drink during the international workshop will be much more the same than if they were paying in their own currencies. The ECO and ECO-convertor and spreadsheets to fill out with the prices of goods, can be found on the website of EYFA.

These are just a few examples to get us thinking. All of these currencies have real value, as goods and services are exchanged with them, they are just promoting a different economic paradigm, based on valuing the resources of our communities rather than thinking of possession of the paper itself as equaling wealth.

FAQ #3 - Why Community Currency in Humboldt, and Why Now?[edit | edit source]

Humboldt County is a prime place for local currency to become highly effective and viable. It is a good match for many aspects of our community and the nature and needs of our local economy.

There are many things that contribute to a good solid starting point for local currency. One of the aspects of Humboldt County that makes local currency a good fit is our sense of community identity and loyalty. “I’m from Humboldt” is meaningful to a significant portion of the residents here and often evokes a sense of pride. Many people are committed to living here, in spite of the economic challenges. We also have a significant number of “over-educated” or “underemployed” folks who have educational and skill backgrounds beyond what is necessary for their primary employment. These folks contribute to our local entrepreneurial spirit – a tendency to try to do things in new and better ways. Finally, there is a strong history of folks who work towards self-sufficiency, while still being willing to lend a neighborly hand.

Most of us are aware, on a day-to-day level, of the significant economic challenges many of us in Humboldt face. One of the harder challenges is the ongoing difficulty in finding employment at a time when there are many more skilled people than full-time jobs available. Wages in Humboldt are fairly low, and many people must work multiple jobs in order to fill in the holes in their income. Furthermore, while many of us have the skills to meet many of our mutual needs, there is a shortage of cash with which to pay each other. It is in regions like this, where both the skills and the resources for healthy communities are at hand, but the means for getting exchanges going is lacking, that there has been historical successes for local currencies.

Like many other rural areas, Humboldt County’s natural resources have and continue to be exported and only part of the value of those resources is returned to circulation into the county. Humboldt Community Currency cannot be a vehicle for removing resources from the community as federal currency can and it is not subject to the ups and downs of the larger market. It is worthless outside of the county aside from being beautiful art. The use of a local currency insulates an economic region from the ups and downs of a larger market.

At this point in time, the Community Currency collective envisions a community that uses both local and federal currency. We envision a healthy and vibrant community where people have personal knowledge of each other’s skills and resources. Using local currency is relevant to all of us, because it simultaneously strengthens our local economy and our sense of community. Humboldt County is an ideal region for local currency, especially in these economic hard times that may not improve in the near future. Now is the time to invest in the regional wealth of Humboldt County.

According to Ithaca Hours, one of the foremost, well known and longstanding community currency projects:

"Local currencies are legal, and like US dollars a form of taxable income. The Federal Reserve and the Internal Revenue Service have no prohibitions on local currencies, as long as their value is fixed to the US dollar, the minimum denomination is worth at least $1, and the bills do not look like federal money."

So lets see how our Humboldt Community Currency measures up:

Therefore, according to the Ithaca test, we are 100% legal in the eyes of the folks in charge of US currency.

"We don't care if he issues pine cones, as long as it is exchangeable for dollars so that transactions can be recorded for tax purposes."

This, according to anecdote, was the position of the US Treasury Department in regards to the one of the first modern community currencies issued in the US (Borsodi's Constant in the early 1970s). This gets to the real reason for most of the requirements: TAXES.

So what about taxes?

Here at the Exchange, we regard tax reporting as a very personal responsibility. You are the one responsible for what you communicate to the IRS. Because of our role solely as initial issuer of currency, we are not in the position to be a reporting body regarding any of your individual transactions that occur. (And if you are interested in learning more about war tax resistance, there are many great resources in the community.)

Municipalities, banks, and merchants in the past all had the ability to issue currency, as well as each state as part of it's sovereign powers. So, reclaim a small piece of local sovereignty and support your currency. While all the government requires of a local currency may be it's ability to be distinguished from their currency and to be taxed just the same - a local currency needs trust and community support to thrive. Our currency is as strong as the confidence that we have in one another to produce something of value.