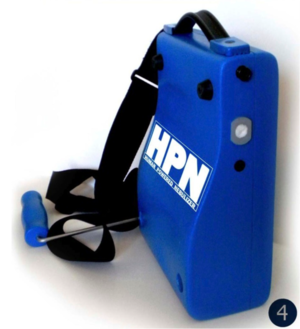 We have developed two versions of the Human Powered Nebulizer. One is hand-cranked; the other is pedaled like a bicycle. The health care provider operates the HPN while the patient induces a sputum sample or receives treatment. This technology is inexpensive and portable, putting respiratory treatment and diagnostics in the hands of even the most remote clinics.

The first clinical trial was conducted in South African in 2010, in conjunction with the London School of Hygiene and Tropical Medicine and the Desmond Tutu HIV Centre. Additional clinical and field trials are currently being conducted in Malawi and El Salvador.

Funding provided by the Marquette University College of Engineering Opus Fund, the Northwestern University Alumnae Foundation, and the National Collegiate Inventors and Innovators Alliance (a philanthropic competition). Generous in-kind support has been provided by Particle Technology Labs, the London School of Hygiene and Tropical Medicine, the Desmond Tutu HIV Centre, Cape Town, South Africa and the Milwaukee Institute of Art and Design.