History of Friends of the Arcata Marsh

"The purpose of the FOAM (Friends of the Arcata Marsh) is to stimulate understanding of the Arcata Marsh Wildlife Sanctuary, it's relationship with Arcata's integrated wastewater treatment system, the surrounding watersheds and bay, and their link with the earth's water cycle. FOAM is a non-profit organization contracted by the City of Arcata to provide this information to the public." [1]

Friends of the Arcata Marsh is governed by a twelve member Board of Directors, as well as a president, vice president, and treasurer. The Board of Directors is made up local community members. FOAM is always looking for prospective board members. Students from Humboldt State University often serve as board members, often times becoming President. For more information, contact FOAM.

In 1987 FOAM received the Innovations in Government Award from the Ford Foundation and the Harvard University Kennedy School of Government awarding FOAM $100,000 to begin construction on the Arcata Marsh Interpretive Center. 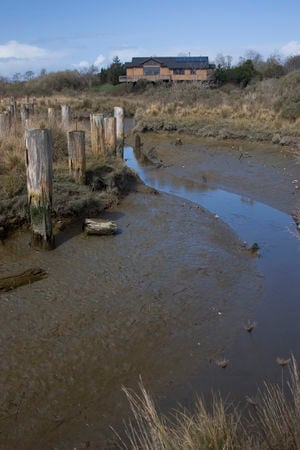 Fig 1: The Arcata Marsh Interpretive Center along Butcher's Slough. The pilings seen are the remains of the plywood mill. Photo Courtesy of Dustin Poppendieck

Through private donation, sponsorships from local businesses, as well as a booth at the annual Arcata Bay Oyster Festival, FOAM raised an additional $56,000 in 1989. FOAM continues to raise money for the AMIC through membership fees, private donation, business sponsorship as well as AAA's Great Battery Roundup. Humboldt County has the highest number of batteries recycled per year. For every used battery that is turned in to a AAA drop-off location in Humboldt County, FOAM receives $2.00 for the Arcata Marsh Interpretive center. [2]

Completed in 1993 on the remains of a plywood mill, the AMIC along Butcher's Slough serves as a starting point for tours and an interactive museum. 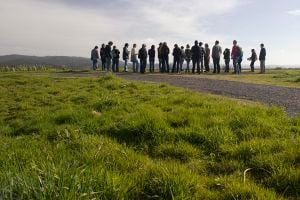 During the tours, like that in Figure Two, volunteers explain what Arcata's treatment wetlands are. Guides also provide information about local wildlife that can be seen, as well as migratory birds that come to the marshes annually to mate. Originally, these tours were given by members of the Board of Directors. However, as demand for tours grew, the Docent program was introduced.

Overseen by the FOAM Board of Directors, docents are local community volunteers who are responsible for giving marsh tours, and staffing the AMIC and special events.

In order to become a volunteer, you must be 18 years of age, and go through a docent training or orientation session, unless you have prior knowledge of the subject matter. If you are interested, call the Interpretive Center to ask for more information.