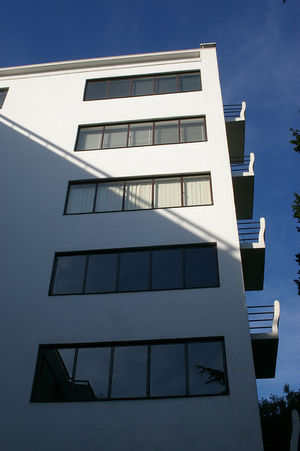 Open-ended balconies contribute to a sense of lightness
Project data

The Highpoint I apartment building, built in England in 1935, is modern-looking, forward thinking for its time, and widely praised.

The shared spaces did not work as planned. The plan for its foyer areas to function as a social forum never worked in practice. Neither was the roof terrace (an important element in Le Corbusier's theory of modern architecture) furnished or greatly used, though it was originally intended to be.[1]

Pricing out the workers[edit | edit source] 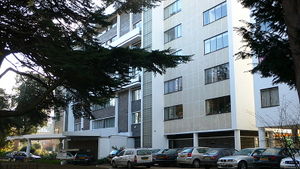 Though designed for workers, the quality of its design led to its apartments being sought after by the middle class.

This is similar to the experience of New Urbanist towns in more recent times, such as Seaside, Florida. When good design is a rare thing, it will inevitably be priced more highly - the only way to make good design available to the majority may be to make it ubiquitous.

It was designed and built by Berthold LubetkinW and Ove Arup.W Arup expressed disappointment with the project, in hindsight.[1]

Page data
Retrieved from "https://www.appropedia.org/w/index.php?title=Highpoint_I&oldid=666451"
Cookies help us deliver our services. By using our services, you agree to our use of cookies.
Categories:
About Appropedia · Policies · Contact · Content is available under CC-BY-SA-4.0 unless otherwise noted.