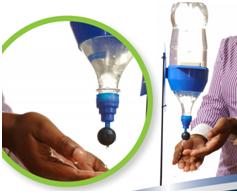 Water-related diseases kill millions of people each year. For example, diarrheal disease was ranked fifth in the list of causes of premature mortality in South Africa in 2000. Hand washing can serve as an effective barrier to several of the transmission routes of diarrheal pathogens. Many people in rural areas do not wash their hands after using the “toilet” simply because they do not have easy access to water or hand-washing supplies.

The Hand-washing Device (HWD) is a self-closing tap fixed to the outside of a toilet. It consists of an empty two liter bottle holding enough water for about 30 washes. It is inexpensive, mechanically-operated, and easy to use, install, and maintain. The HWD has approximately 100,000 units installed in South Africa.

The device was designed for low-income households, schools, disaster areas, and large gatherings such as refugee camps. It is widely distributed throughout South Africa.

This device has philanthropic funding from the Council for Scientific and Industrial Research.

The manufacturer website states that the patent was granted in 2006, but the Appropedia Medical Device team was unable to find patent.