The conservation of existing natural enemies in an environment is the third method of biological pest control. Natural enemies are already adapted to the habitat and to the target pest, and their conservation can be simple and cost-effective. Lacewings, lady beetles, hover fly larvae, and parasitized aphid mummies are almost always present in aphid colonies. 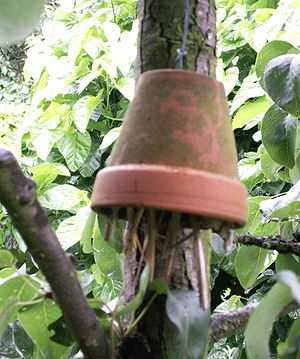 A turnaround flowerpot, filled with straw to attract Dermaptera-species

Cropping systems can be modified to favor the natural enemies, a practice sometimes referred to as habitat manipulation. Providing a suitable habitat, such as a shelterbelt, hedgerow, or beetle bank where beneficial insects can live and reproduce, can help ensure the survival of populations of natural enemies. Things as simple as leaving a layer of fallen down leaves or mulch in place provides a suitable food source for worms and provides a shelter for small insects, in turn also providing a food source for hedgehogs and shrew mice. Compost pile(s) and containers for making leaf compost also provide shelter, as long as they are accessible by the animals (not fully closed). A stack of wood may provide a shelter for voles, hedgehogs, shrew mice, some species of butterflies, ... Long grass and ponds provide shelters for frogs and toads (which themselves eat snails). Not cutting any annual or other non-hardy plants before winter (but instead in spring) allows many insects to make use of their hollow stems during winter.[1] In California prune trees are sometimes planted in grape vineyards to provide an improved overwintering habitat or refuge for a key grape pest parasitoid. The prune trees harbor an alternate host for the parasitoid, which could previously overwinter only at great distances from most vineyards. The provisioning of artificial shelters in the form of wooden caskets, boxes or flowerpots is also sometimes undertaken, particularly in gardens, to make a cropped area more attractive to natural enemies. For example, the stimulation of the natural predator Dermaptera is done in gardens by hanging upside-down flowerpots filled with straw or wood wool. Green lacewings are given housing by using plastic bottles with an open bottom and a roll of cardboard inside of it.[1] Birdhouses provide housing for birds, some of whom eat certain pests. Attracting the most useful birds can be done by using a correct diameter opening in the birdhouse (just large enough for the specific species of bird that needs to be attracted to fit through, but not other species of birds).

Besides the provisioning of natural or artificial housing, the providing of nectar-rich plants is also beneficial. Often, many species of plants are used so as to provide food for many natural predators, and this for a long period of time (this is done by using different types of plants as each species only blooms for a short period). It should be mentioned that many natural predators are nectivorous during the adult stage, but parasitic or predatory as larvae. A good example of this is the soldier beetle which is frequently found on flowers as an adult, but whose larvae eat aphids, caterpillars, grasshopper eggs, and other beetles. Letting certain plants (as Helianthus spp, Rudbeckia spp, Dipsacus spp, Echinacea spp) come into seed is also advised, to supply food for birds. Having some trees or shrubs in place that carry berries is also practiced and provide a source of food for birds. Often, trees/shrubs are used that do not produce berries fit for human consumption, avoiding food competition. Examples are Sorbus spp, Amelanchier spp, Crataegus spp, Sambucus nigra, Ilex aquifolium, Rhamnus frangula. Obviously for this to work, these trees can not be pruned/trimmed untill after the birds and other animals have eaten all of the berries.

Also, the providing of host plants (plants on which organisms can lay their eggs) may also be necessairy. These organisms for which host plants can be foreseen can be certain natural predators, caterpillars, and even a limited amount of host plants for pests can be tolerated. The latter ensures that natural predators remain in the vicinity and tolerating a certain amount of loss to pests would be needed anyhow since no chemical pesticides can be used (organic pesticides can be used but often can, on itself, not eliminate all pests during an infestation). This, as natural predators are susceptible to the same pesticides used to target pests. Plants for caterpillars are optional and only ensure that sufficient amounts of moths are produced which form a source of food to bats. Bats may be wanted as they also consume large amounts of mosquitoes, which despite not targeting any plants, can still be a nuisance to people in areas where there is much standing water nearby (i.e. pond, creek, ... ).

Conservation strategies such as mixed plantings and the provision of flowering borders can be more difficult to accommodate in large-scale crop production. There may also be some conflict with pest control for the large producer, because of the difficulty of targeting the pest species, also refuges may be utilised by the pest insects as well as by natural enemies. Some plants that are attractive to natural enemies may also be hosts for certain plant diseases, especially plant viruses that could be vectored by insect pests to the crop.[2]