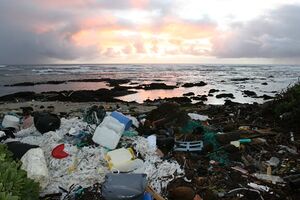 "I was confronted, as far as the eye could see, with the sight of plastic. It seemed unbelievable, but I never found a clear spot. In the week it took to cross the subtropical high, no matter what time of day I looked, plastic debris was floating everywhere." Moore

There are five major ocean gyres and numerous smaller gyres, eight of which act as zones of aggregation. 'Half of the world's oceans are accumulators, high-pressure gyres that bring stuff into themselves; and every single one of them is full of plastic (Moore).' Wherever plastics accumulate within surface waters, they also eventually sink and smother the ocean floor below. In short, our oceans are replete with plastics. 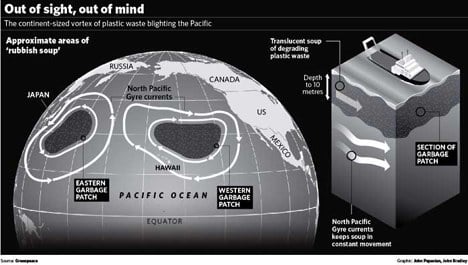 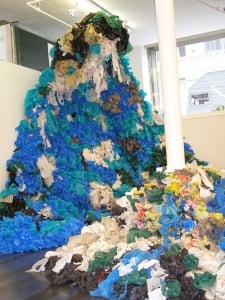 Plastics are a recent development in human history, dating back to the mid to late 1800s with Alexander Parke's synthesis of a cellulose-derived material called Parkesine (or celluloid). In 1909 Leo Hendrik Baekeland, a Belgian-born American chemist, created the first completely synthetic plastic. He combined mixtures of phenol (C6H5OH), originating from coal tar, and formaldehyde (HCOH). Under heat this substance was uniform and sticky, yet upon cooling it became extremely hard, capable of withstanding wear and tear and resisting decay. This new category of materials came to be known as "plastics" (a term coined by Baekeland). Since that time plastic science has evolved steadily, streaming from the advent of nylons to the more recent developments of liquid crystal and conductive polymers. Plastics have become the material panacea for the manufactured products of consumer societies. From their humble beginnings in 1868 as a replacement for ivory in the production of billiard balls, plastics have come to reign over an ever-expanding range of consumer goods. After World War I with the use of petroleum and improvements in chemical technology there had been a virtual plastics explosion. By the 1960s plastics 'were within everyone's reach due to their inexpensive cost. Plastics had thus come to be considered "common" - a symbol of the consumer society (www.americanchemistry.com).'

Burgeoning populations infected by an ethos of disposability coupled with plastics' relative indestructibility have helped to catalyze a plastic pollution crisis. Waste and pollution are cancers of consumer societies, and disposable consumer cultures have been metastasizing globally in pandemic proportions.

Conservative expense of manufacture, rampant deficiencies in government regulation, and their amorphous nature have granted plastics their ascendancy amid disposable societies. Plastics' dominion within the waste culture poses pernicious threats to ecosystems and their inhabitants. Aided by gravity, plastics have been running downstream and downhill, concentrating in our oceans and throughout the food web (including us).

Plastics are globally permeant, inundating our households, landfills, open spaces, waterways, and seas. This large class of substances owes its success to their relatively inexpensive manufacture and to their versatility. Physical attributes such as durability, chemical resistance, water-insolubility, and their capacity to be molded, extruded, cast, or drawn into filaments have helped to insure the steady dilation of their manufactured applications. The very same attributes, that have enabled plastics to dominate fabricated goods, are radical to the accumulation of plastics within virtually every niche on our planet. It is unknown whether plastics ever fully decompose. Plastic biodegrades very slowly (and it needs specific conditions to do this; marine environments do not provide especially compatible conditions for biodegradation of plastics). Over time they photo degrade and break down into smaller and smaller pieces yet these fragments retain their basic chemical structure.

Plastics equally attract toxic materials from surrounding seawater/environment as well as release toxic additives from their manufacture (these chemicals are broadly known as "plasticizers"). As plastics photo degrade they leach toxic chemicals including but not limited to lead, cadmium, mercury, chlorine, phthalates, and bisphenol-A. These chemical additives are used as hardeners, softeners, stabilizers, and various other 'plasticizers' in the plastic production process. DDT, DDE, Hydrocarbons, PCB, PFOA, PBDE's, POP's and Bisphenol-A are known carcinogens that can lead to cancer, obesity, diabetes, infertility and a variety of neurological disorders (among other conditions). It is estimated that additives represent approximately fifty percent of plastics by weight (Moore, 132). Halogenated organic compounds (HOCs) include legacy pollutants such as DDT and PCBs; HOC's are persistent, stable, readily absorbed but not metabolized, accumulating in fatty and liver tissues (bio-accumulative- meaning: start out small but grow in intensity (toxicity) at every subsequent level along the food chain).

'Uncontrolled discharge of pollutants into bodies of water causes marine environment contamination and violates the normal functioning of marine ecosystems. Due to the global atmospheric circulation and the integral character of the ocean itself, local anomalies in one part of the ocean affect natural conditions in neighboring regions, and thus gradually acquire a global character (Suvorov, 77).' Plastics are saturating the foundations of life in the marine world, smothering the floors of sea and fresh water bodies and outnumbering plankton in some areas on a scale of ten to one. From plankton on up through the food chain to humans and our livestock and produce (animal feeds and fertilizers contain high fish meal and fish oil content...there has been pelletized feed for cattle since 70s-meaning that they actual cattle feed includes plastic pellets), plastics and their toxic additives are now a part of our internal chemistry. Captain Charles Moore acknowledged, "We are putting everything in the ocean on a plastic diet."

Here we stand: people, nations, organisms and ecosystems, united in our positions of drowning in a sea of plastic. Plastic pollution unites not only life forms, but also forms of pollutions. Plastic particles serve as toxic substrates and accumulators, influencing the rebar of trophic systems. Plastic pollution can serve as a cornerstone in the beginnings of a dialogue between all sects of societies to address strategies for our endurance and perseverance on this blue planet. As the Hopi prophecy states, "We are the ones we have been waiting for." 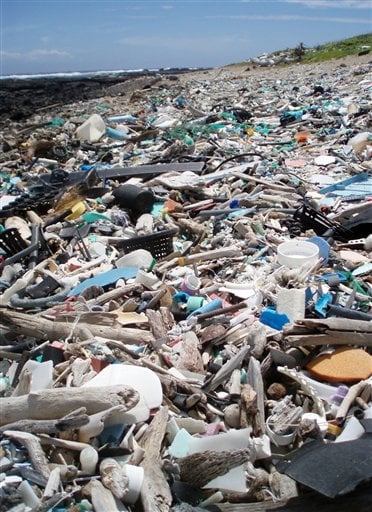 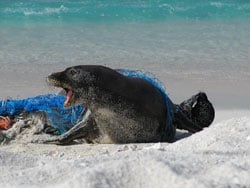 Page data
Retrieved from "https://www.appropedia.org/w/index.php?title=Great_Pacific_garbage_patch&oldid=601812"
Cookies help us deliver our services. By using our services, you agree to our use of cookies.
Categories:
About Appropedia · Policies · Contact · Content is available under CC-BY-SA-4.0 unless otherwise noted.