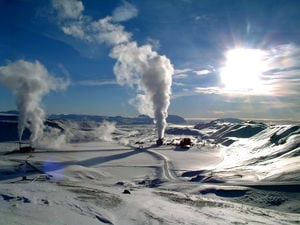 Geothermal energy is power derived from the Earth's internal heat.This thermal energy is contained in the rock and fluids beneath Earth's crust. It can be found from shallow ground to several miles below the surface, and even farther down to the extremely hot molten rock called magma. [1] Iceland is a world leader in the geothermal energy area. Geothermal power facilities currently generate 25% of the country's total electricity production. [2] 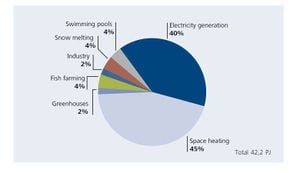 In 2011, roughly 84% of primary energy use in Iceland came from indigenous renewable resources. Thereof 66% was from geothermal. [6] Geothermal energy is not only used to heat homes and businesses, it is also used for bathing and recreation, snow melting, the heating of greenhouses, fish farming, generation of electricity and a variety of industrial uses. [7]

The most common use is obviously space heating with 9 out of 10 Icelandic homes relying on the cheap source of energy to warm their homes. Also, by depending so much on geothermal energy, Iceland has been able to import less fuel and lessen their overall carbon footprint.[8]

The Icelandic economy also is very reliant on geothermal energy because many of it's components rely on it. For example, geothermal energy is used to dry fish. The main application has been the indoor drying of salted fish, cod heads, small fish, stockfish and other products. Until recently, cod heads were traditionally dried by hanging them on outdoor stock racks. Indoor drying of fish is preferred because of Iceland's extreme weather conditions. About 15,000 tons of cod heads are exported every year making it one of Iceland's largest exports. [9] Many of Iceland's factories and plants also rely on geothermal energy is run effectively, these places give many of the Icelandic people employment.

The use of geothermal energy to melt snow has increased dramatically in the last two decades. It is now used mainly in areas where cars are parked. It is also used to de-ice sides walks and streets. In downtown Reykjavik, a snow-melting system has been installed under the sidewalks and streets over an area of 50,000 m2. [10] 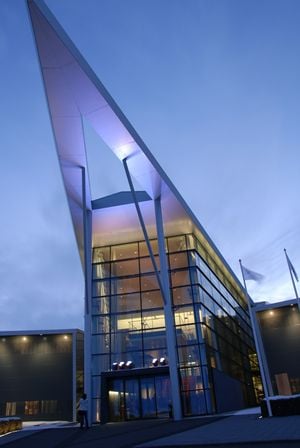 Hellisheidi is one of Iceland's largest geothermal plants. The geothermal power plant is a flash steam, combined heat and power plant (CHP) located in SW-Iceland, on one of the largest wet geothermal systems in Iceland. [12] The plant´s purpose is to meet increasing demand for electricity and hot water for space heating in the industrial and domestic sectors.
Geothermal activity in the Hengill area is connected with three volcanic systems. At least three volcanic eruptions have occurred in the Hengill area in the last 11,000 years, the most recent being 2,000 years ago. The Hengill area is part of the Hengill region, which covers 112 square kilometers and is one of the most extensive geothermal areas in Iceland.[13]