Damage to crops by freezing temperatures causes crop yield losses somewhere in Ontario every year. Such damages range from cold set-back of alfalfa in spring to loss of tomatoes in a home garden in the fall. Some of these losses can be prevented. A number of different methods are available for preventing freeze damage to crops. It is important for growers to be aware of these so that they can evaluate which procedures are feasible and economical for combating freeze damage. This Factsheet provides some information on various freeze prevention methods that are available.

The methods are described in terms of active and passive techniques. Active methods are those which are used when the danger of a freeze is present and include such techniques as adding heat and covering crops. Passive methods are those which are used well in advance of the freeze and include proper scheduling of planting and harvesting within the safe freeze-free period, proper crop and field selection, among others. Specific examples of both methods will be discussed in more detail.

The terms frost and freeze are often used interchangeably. In this Factsheet the word freeze will be used for the subfreezing temperature conditions that cause crop damage, and has the same meaning as 'killing frost'. The word frost will refer to the condition that exists when air temperatures drop to the freezing point of water (00C), or lower, but which may or may not result in freeze damage to crops.

Frosts are frequently classified as either advective or radiative, depending on the atmospheric conditions under which they occur. An advective frost occurs when cold air from another region moves into an area and winds remain relatively strong. Radiative frosts are produced locally and occur only during clear, calm nights (see OMAFRA Factsheet The Behavior of Frost in Ontario, Agdex 079, Order No. 85-055).

To properly evaluate the benefit of freeze prevention methods it is necessary to understand the effect of below freezing temperatures on the crop(s) concerned. Some effects are well known while others are less clear and require more research. The minimum temperature (known as the "critical" temperature) which must be reached before damage occurs may be influenced by many factors. These include plant species, variety, growth or development stage, plant vigor, soil conditions, surface cover; freeze intensity and duration; thawing conditions, cloud and wind conditions during the freeze; and others.

Many plants have less freeze-resistance when they become mature than during earlier stages of growth. A healthy, growing plant can often withstand a frost better than a weak plant.

The critical temperatures needed for damage to occur may vary depending on the duration that temperatures remain below freezing. For example, buds of fruit trees may be damaged if exposed to -20C for more than 24 hours, but may survive if exposed to -60C for less than 2 hours. Thus the critical temperature for a radiative frost lasting for only a few hours in the early morning may be lower than for an advective frost which may continue even during daytime hours.

Thawing conditions often affect the extent of damage after a frost. For example, tobacco leaves which are thawed out gradually after freezing have been known to suffer less damage than if thawing was rapid.

The effect that freezing temperatures have on crops will vary. In some cases it results in a total loss of the plant parts affected. For example, frozen apple blossoms will not produce fruit. In other instances it will only result in a decline in yield or quality. If potato tops are frozen prematurely, the result will be only a partial loss in yield and/or quality of tubers. A premature frost can affect both yield and quality of silage and grain corn as well as other cereal crops. Sometimes a frost can cause a decline in the ability to store a crop. For example, partly frozen potatoes may break down sooner in storage and also cause other healthy tubers to deteriorate. Whether or not freeze prevention methods are economical will depend a lot on the amount of loss in crop yield or quality that results from a frost. Therefore growers should be well aware of the effects of below freezing temperatures on their crops.

Table 1 indicates approximate critical temperatures for some crops grown in Ontario. These are temperatures of the crop, not in a weather screen 1.5 metres above ground. Keep in mind that the crop temperature may be below freezing even though the temperature in the weather screen is several degrees (C) above freezing. (The opposite is also common for crops such as potato tubers that are beneath the soil surface.) 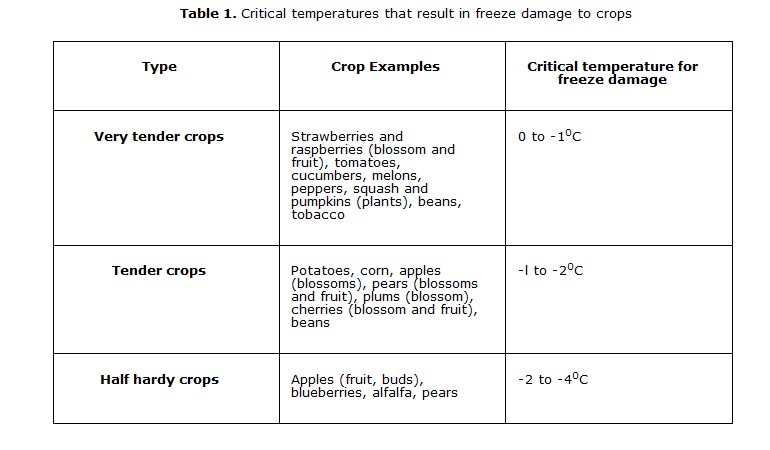 Passive methods used well in advance of the actual freeze danger are probably the most economical and effective. Some are really only common sense and already widely used, but it is nevertheless useful to list them. Following are some examples of passive methods which can be used.

Moisture in the soil has some counteracting effects. Excessively wet soils gain less heat energy during the day as more of the sun's energy goes into evaporating moisture. This can reduce the heat available to the crop at night. On the other hand excessively dry soils are poorer heat conductors and are able to store less heat, and therefore result in a higher risk of frost. A dry peat soil is a particularly poor heat conductor and has a very low heat storage capacity, so that nighttime minimum temperatures over such surfaces may be considerably lower than over mineral soils. It may be possible to improve the heat characteristics of peat soil by the addition of mineral soil.

Mulches on the soil surface increase risk of frost by behaving as insulators. Less heat is absorbed by the soil during the day and less is released at night. Mulches can help to avoid freeze damage, however, if they completely cover the sensitive plant parts. Delaying the removal of straw mulches in strawberries in spring can sometimes help to delay the bloom date past the time when there is danger of frost. However, the straw will also delay the warming of the soil, and if it remains underneath the blossoms at the time of frost, it will increase the risk of damage.

Cover crops under orchards act similarly to mulches and thus can increase the risk of frost. They may have other beneficial effects, however, such as reducing soil erosion, which outweigh the freeze risk factor.

Covering of plant parts beneath the soil surface with a layer of soil is a way of protecting against frost. Well-hilled potatoes are less prone to experience frost damage to tubers than if the hills are poorly formed. Dry soils cool more rapidly near the surface and therefore adding moisture to the soil may sometimes help to reduce risk of frost damage to tubers.

While soil management practices may only provide a few degrees (C) of protection, even this small amount could affect freeze dates by 1 to 2 weeks or more, and in some cases could mean the difference between a total loss of the crop and relatively little damage.

The above passive methods of freeze protection are worth taking so that active methods are not necessary in most seasons because the latter are expensive and can only be afforded when the crop has a high value per unit area.

Active protection takes place just before and during the occurrence of the frost after a warning has been issued in the weather forecast. They are usually only effective under radiative frost conditions when winds are light or calm, and are most suitable in low-lying, frost prone areas. Advective freezes usually cannot be prevented by active means.

It is very important to have good forecasts of on-farm minimum temperature and wind conditions for active freeze protection. Moreover, knowledge of the critical temperatures that cause crop damage is needed. Farmers should know the nighttime temperature variations as they occur over their land and which fields are most prone to frost, so that action can be taken in these fields first. The basic concept of these methods is very simple. They either depend on the reduction of heat loss from the surface, stirring the air to break up the temperature inversion, or adding heat to maintain the temperature above the danger point.

In order to determine if it is economical to invest in the equipment, materials and labor for active freeze protection many factors must be considered. These include the degree of risk, the likely duration and severity of frosts, value of the crop, and effectiveness of the method to be used. Some of the active methods are described below.

Crops can be protected from freeze damage by proper site selection and certain crop and soil management practices (passive methods) or by taking action when frost warnings are issued. The various passive and active methods of freeze prevention are described herein. The terms frost and freeze are defined and the atmospheric conditions in which active freeze prevention can be taken. No discussion of the economics of freeze prevention is included. 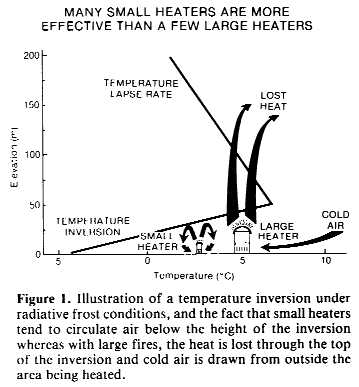