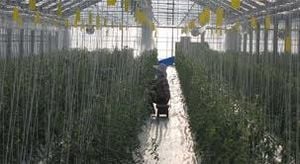 Film farming refers to an alternative method of organic farming that uses a hydromembrane composed of a water-soluble polymer (hydrophillic booster, SkyGel) and a hydrogel-based IMEC film as opposed to traditional soil. SkyGel acts as a reservoir and fertilizer for the plant, holding water up to 1,000 times its weight. The IMEC film and the SkyGel work together to reduce the plant's water intake by 90% while increasing crop yield and plant productivity. The produce grown with the hydrophillic booster is exceptionally nutritious and rich in sugars, GABA and Lycopene. Additionally, crops grown using film farming technology are resistant to pathogens. The hydromembrane absorbs the water and nutrients provided by the culture medium but it does not release any to the plant side.[16] The surface of the hydromembrane cannot be penetrated by bacteria or viruses so pesticides become unnecessary. Plants grown with a hydrophillic booster have proven to be more resilient with enhanced seed germination and an improved plant survival rate.[17]

This unique method of farming was invented in 2009 by Dubai-based company Agricel, founded by Yalman A. Khan and Kunal G. Wadhwani. The Agricel network is primarily based in Japan but it has extended to China and Australia. Agricel's vision seeks to feed the future by promoting film farming and the use of hydrophillic boosters in an effort to limit the use of water and to fight world hunger. With the addition of a greenhouse, agriculture can be utilized anywhere in the world with film farming and hydrophillic technology.[18] 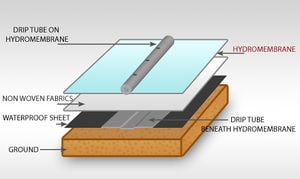 In order for this system to work, it is only possible through the use of this system created by Agricel.

Plants are grown on a hydromembrane, created from a water-soluble polymer as well as a hydrogel, which is part of a larger agricultural system. This system, called IMEC, is composed of many parts of which are created by Agricel. There is the IMEC controller, as well as the IMEC water and fertilizer supply unit. It also consists of a waterproof sheet, a drip tube, a non-woven fabric, the hydromembrane.[19]

The IMEC water and fertilizers supply nutrients as well as water to the plants above and below the hydromembrane at different fertilizer concentrations which are preset with the IMEC controller. The controller also automatically controls with amount of water which is dispersed throughout the tubes (upper and lower) one at a time.[21]

The hydromembrane film absorbs the nutrients released from the lower drip tube, where it is held by the film. It does not penetrate the through to the plant side, until the plant's extremely thin yet very dense roots induce osmotic shift which allows the absorption of nutrients and water. This creates high nutrient produce using minimal water and space.[22]

The nutrients released from the upper drip tube assist in the growth of plants. The controlled nutrient supply provides sustainable production while maintaining the quality of the crop.[23]

While the initial system cost of the hydromembrane is similar to the cost of traditional soil culture systems and hydroponics, the long-term cost of film farming is significantly lower because the the IMEC costs of water, seedlings, fertilizers and labor are much cheaper than the current house soil culture. Beyond that, the film membrane can only absorb water, meaning viruses and other threats to plants cannot be absorbed, creating a much safer plant environment when compared to traditional pesticide techniques. It also requires less soil as the roots of the IMEC system grow in a thin and flat sheet on the hydromembrane requiring a small amount of soil or culture medium.

The hydrogel film can be bought at a price of around $2,000/ acre with a professional installation of about $2 Million.

Build Your Own Farm

Data halaman
Retrieved from "https://www.appropedia.org/w/index.php?title=Film_Farming/id&oldid=664171"
Cookies help us deliver our services. By using our services, you agree to our use of cookies.
Category:
About Appropedia · Policies · Contact · Content is available under CC-BY-SA-4.0 unless otherwise noted.