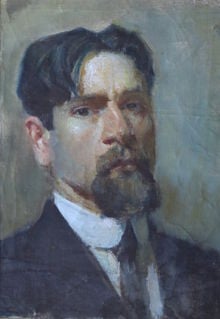 Self portrait of Ernesto Genoni[1]

Ernesto Genoni (21 September 1885 - 11 February 1974) was the pioneer of biodynamic farming - and organic farming - in Australia.[1] In 1928 he was the first Australian to join Rudolf Steiner's Experimental; Circle of Anthroposophical Farmers and Gardeners. From 1928 he farmed using biodynamics at Delmore (Victoria) with his brother Fred Genoni, and also at his brother's properties at Broomehill (Western Australia).[1]

WIth his partner Ileen Macpherson he founded Demeter Farm in 1934 in Dandenong (Victoria) which operated as a biodynamic farm for two decades.[2][1]

Ernesto Genoni was born in Tirano, Italy. He trained as an artist at the Brera Academy of Art in Milan. He was a stretcher bearer in the Australian Imperial Forces serving on the Somme, at Pozieres and Ypres in World War 1. He was introduced to Rudolf Steiner in 1920. He spent 1924 studying under Steiner at the Goetheanum in Dornach, Switzerland. In Dornach he experimented with painting in the Anthroposophic style.[2] He taught Anthroposophy in Melbourne and Adelaide.[1].