Most electricity is produced from coal, gas, or oil generators that convert only about 30% of the fuel's energy into electricity. Because of electricity generation and transmission losses, electric heat is often more expensive than heat produced in the home or business using combustion appliances, such as natural gas, propane, and oil furnaces.The heating area on most electric heaters generally looks like Fig. 1. 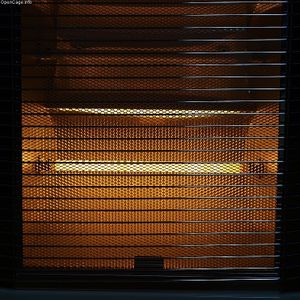 Generally, the air is circulated through a system and as it cycles through it is used to heat an area. [1]

The equation for resistance is:

Where R is the resistance in ohms, V is the voltage measured in volts, and I is the current in amps. The heat output can be measured by the equation

Where P is Power in watts, I is current in amps and is the voltage across the system.

Watts also equal to joules/second is the heat output per unit times.[2]

Page data
Retrieved from "https://www.appropedia.org/w/index.php?title=Electric-resistance_heating&oldid=659035"
Cookies help us deliver our services. By using our services, you agree to our use of cookies.
Category:
About Appropedia · Policies · Contact · Content is available under CC-BY-SA-4.0 unless otherwise noted.