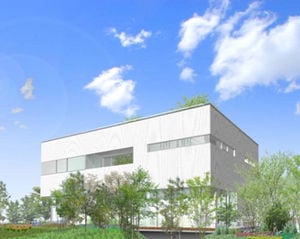 The Panasonic Eco Idea House is a building on the edge of the Tokyo Bay in Japan that emphasizes green technology and sustainable living. Panasonic presented the Eco Idea House in 2009 as a proof of concept for modern sustainable living. The house was also positioned as a response to global warming and the depletion of natural resources. It features a wide variety of modern technologies that result in virtually zero carbon emissions.[2]

Panasonic’s Eco Idea House was unveiled in 2009. It currently stands as a part of the Panasonic Center in Tokyo. The building is open to the public on weekends. Admission is free. 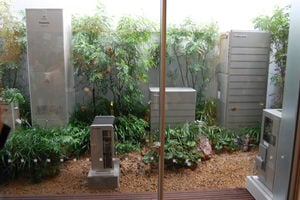 The Eco Idea House requires no outside energy to function, operating completely off the grid. To meet its limited electricity needs, the house employs roof-based solar panels and hydrogen fuel cells in the backyard. Excess electricity is stored in lithium-ion batteries.[4]

Sensors in the home detect where residents are and manage power accordingly. Lights and appliances turn on and off as people enter and leave rooms in order to use as little electricity as possible.[5]

Temperatures of individual areas are controlled in order to avoid heating empty rooms. Air can also be blown directly on occupants, saving energy by heating or cooling only the people, rather than the whole room.[6] Heaters and air conditioners supplement airflow with a pocket of air under the house that naturally stays warmer in the winter and cooler in the summer.[7] The house also has insulation with a vacuum layer to further prevent the escape of heat. In addition, the house's hot water pipes double as floor heating.

The combination washer/dryer in the Eco Idea House has a tilted drum, which requires less water to wash clothes.

Many windows and skylights allow sunlight to light the house in the day while LEDs illuminate it at night. Photosensors adjust the intensity of the LEDs based on the amount of sunlight.[8]