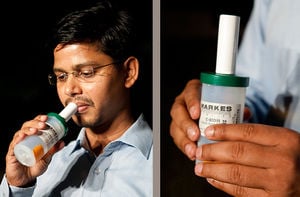 Tuberculosis (TB) is a common and potentially lethal infectious disease caused by various strains of mycobacteria, usually Mycobacterium tuberculosis. TB kills close to 1.7 million people globally every year and is highly contagious, and is primarily spread through airborne transmission. When infected people cough, sneeze, talk or spit, they propel TB germs, known as bacilli, into the air. A person needs only to inhale a small number of these to be infected. Left untreated, each person with active TB can infect on average between 10 and 15 people every year.

The "E-Nose" is a battery-operated, hand-held unit, similar to a police breathalyzer. A patient blows into the device and sensors pick up TB biomarkers in the breath droplets, resulting in an almost instantaneous and highly accurate diagnosis. Each "E-Nose" costs roughly $20 and its size and battery operation would make it accessible to rural communities in countries such as India with poor or non-existent power supplies.

Prototypes were developed in Delhi, India. Five institutes will carry out clinical trials, two in Delhi, and one each in Kolkata, Chennai, and Mumbai.

The project received a grant of $950,000 from the Bill and Melinda Gates Foundation Grand Challenges Program for a two-year development period.

Morrow A. (2011.) Introducing the E-Nose, a sniffer test for tuberculosis. Link available here.