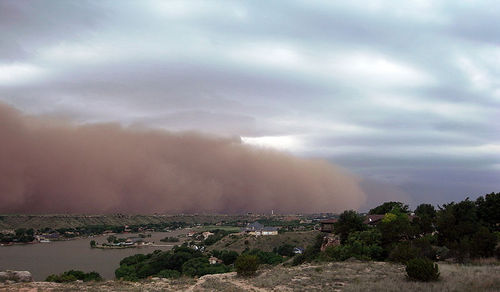 A dust storm forms when topsoil, dry sand grains or similar surface particles are blown up into the air. Rather than settling quickly, as would be the case with a light wind, if a stronger wind containing the particles blows into air that is rising, then the particles can be carried very high. In the case where the dust or sand supply is large (such as with eroded soil after a drought), a strong wind coupled with such rising air can produce a dust storm (it is a sand storm if the particle source is sand).

Dust storms usually arise in arid and semi-arid areas.[1] Once the dust or sand particles are airborne at a great height, the particles can travel incredible distances, often thousands of kilometres.

The effects of a dust storm[edit | edit source]

Visibility during a dust storm is virtually nil. Lights from car headlights and street lamps may glow but be the only thing visible in an urban environment as the dust storm passes through.

Dust or sand will penetrate buildings during such a storm, even though doors and windows have been closed tightly. Clothing is not able to prevent penetration of the particles, hence people are advised to remain indoors. Dangers to human beings include silicosis, which can lead to asphyxiation or lung cancer and dry eyes (keratoconjunctivitis), which can lead to blindness if not treated quickly.[1]

Animals are affected, and can easily choke both in air and on land. Livestock and companion animals should be kept indoors, in sheds, barns, inside the house, etc.

Precious topsoil is lost during a dust storm, never to be replaced from whence it blew.

Vehicle engines and machinery can become clogged by the particles and cease to function.

Dust storms can spread disease through virus spores in the ground blown up into the atmosphere in the particles caught up in the dust storm and transported to new parts of the globe.[1]

As already noted, dust storms tend to originate principally in arid or semi-arid areas.[1] The improper and careless management of drylands may be a major contributing factor to an increase in the frequency and severity of dust storms.[1]

The main areas from which regular dust storms are sourced include:

Areas commonly affected by dust or sand storms include:

The Dust Bowl in 1934 occurred during a drought, carrying prairie soil from the prairie states to as far down as Texas and as far up as Canada.

A dust storm blanketed Sydney and eastern Australia in September 2009.[1]

The annual "Yellow Dust" occurs in northeast Asia sporadically every Spring when dust blows from Kazakhstan, Mongolia and China to the Russian Far Ear, Korea, and Japan. In recent years it has become a greater problem due to desertification and increased pollution.