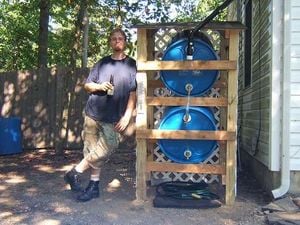 I made this project out of parts that I mostly had saved from various other projects and from work. It was built in October 2007 and originally published on instructables.com shortly thereafter. It's pretty easy and can be adapted for use in several applications, but the one shown here was installed at my house and is intended for use with the gutter system on a residential home.

It can collect nearly 100 gallons of water from my roof each time it rains, which I use to water my garden and lawn. Total build time was three days using fairly simple parts, most of which can be found at a hardware store. However, it does require the use of several different tools and proper safety precautions should always be taken.

The site I originally published it on can be found here.

To begin, I laid out a 55 gallon drum on the ground and dug a hole on either side in the spot that the poles (4x4 pressure treated lumber posts) were going to go. 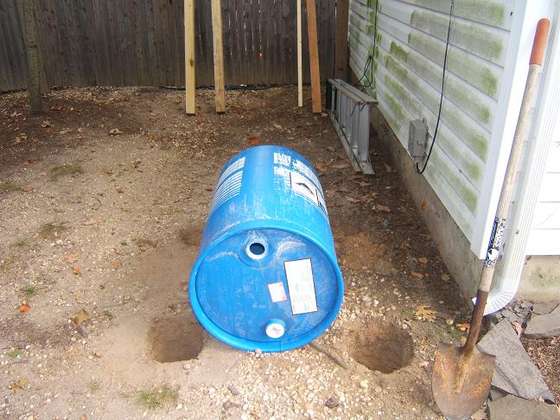 With the first post in the ground, I leveled it off with a level and propped it into place with scrap wood. Then, I began to mix the concrete. This entire project took three 50lb. bags of fast-drying concrete. With the concrete mixed to the right consistency, I poured it around the base of the post. 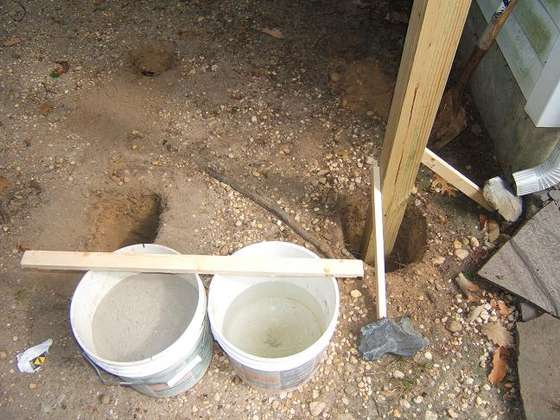 The second post went in the same way as the first. From end to end -including the posts, it wound up measuring 39 inches. 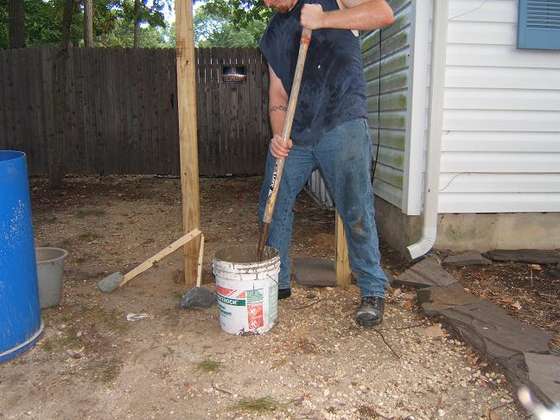 With the front two posts in place, I took a barrel and laid it back into place. This made it possible to judge where the last two posts should go. 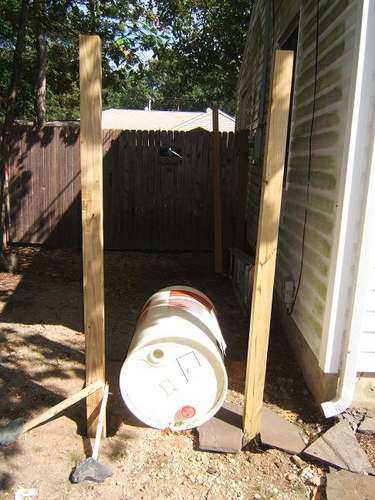 Of course, each post got 6 screws in the base to help them stay in the concrete.

All screws used in this project were 2 1/2 inch coarse-thread exterior screws. 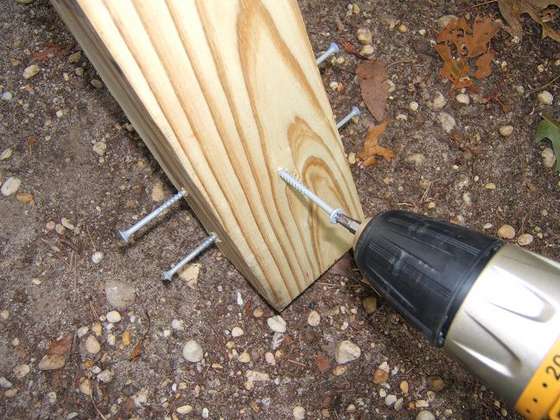 With the last two posts in, the concrete is allowed to dry and harden.

Including the posts, the front and back both measured 39 inches and the left and right sides both measured 38 inches. However, anybody attempting this should measure and place the posts in whatever configuration that is best. 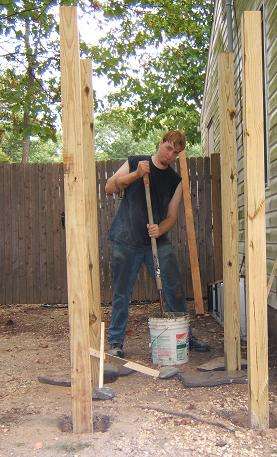 While the concrete dried, I began to make the barrel braces. These need to be strong, since they will be supporting the entire weight of the barrels.

For this, I used two pieces of 2x4 screwed together with 5 screws (3 on one side, 2 on the other). The pieces measured 39 inches.

After that, I drilled pilot holes on both sides (centered and 1 3/4 inches in). Into these pilot holes, I drove galvanized lag bolts (with washers) using a ratchet with the appropriate tip.

Driving the lag bolts in ahead of time will make it easier when attaching them to the posts. 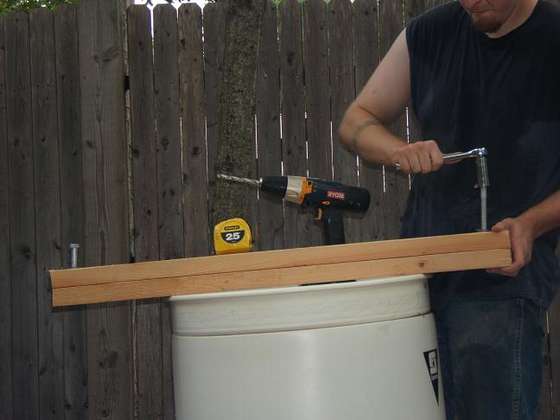 For a two-barrel system, I needed to make four of the barrel braces.

This is what a finished barrel brace looked like.

All four of them measured 39 inches apiece. 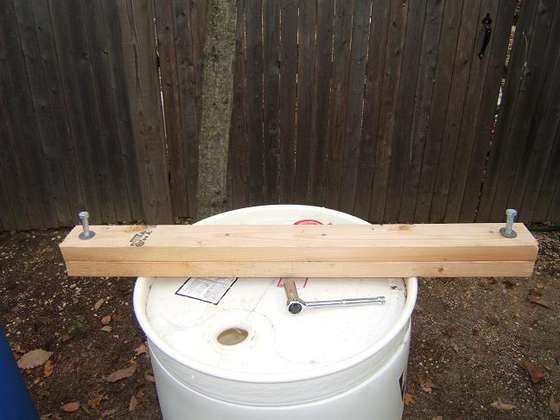 I drilled pilot holes into the posts where the barrel brace was to go. The pilot holes were exactly 13 inches up from the ground.

I drove the lag bolts the rest of the way with a ratchet, making sure to check with a level. 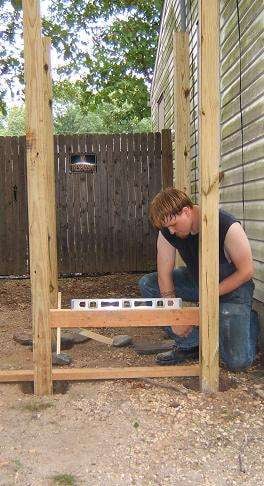 The bottom two pole braces went in next.

They went in directly under the first barrel brace and were screwed in after being checked with a level.

These offer nothing by way of support for the barrels. All they do is help to maintain structural stability on the frame. 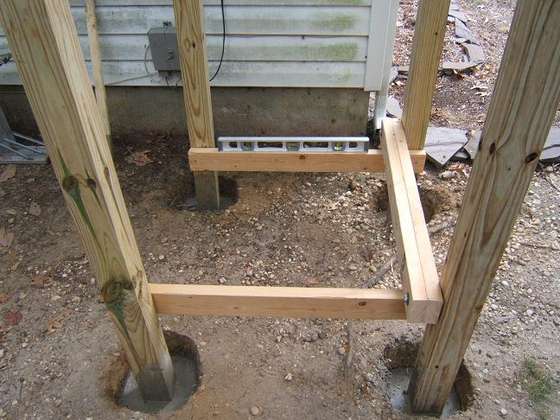 Next, the second barrel brace went in. These two will be what supports the bottom barrel.

The pilot holes that I drilled to accept the lag bolts were 23 inches from the ground.

The difference in height makes the barrel tip slightly forward. The angle helps to fit more water in the barrels as they fill and allows the barrels to drain more completely. 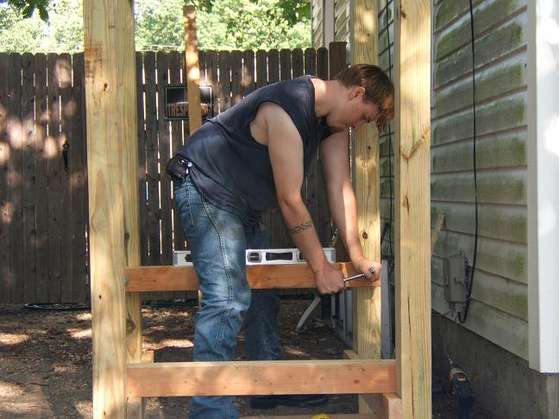 I tested the bottom braces with an empty barrel to be certain that the barrel would fit properly. 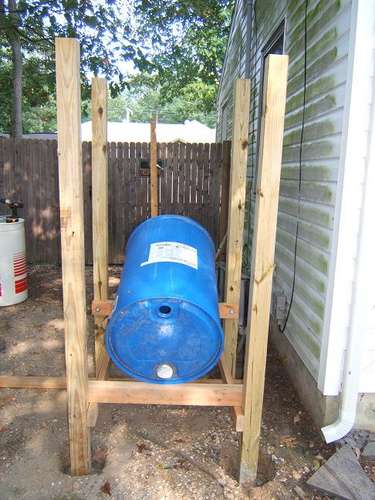 After that, I cut out the top two pole braces.

The top pole braces will go on the same angle as the barrels, so it is useful to measure to determine the appropriate length. 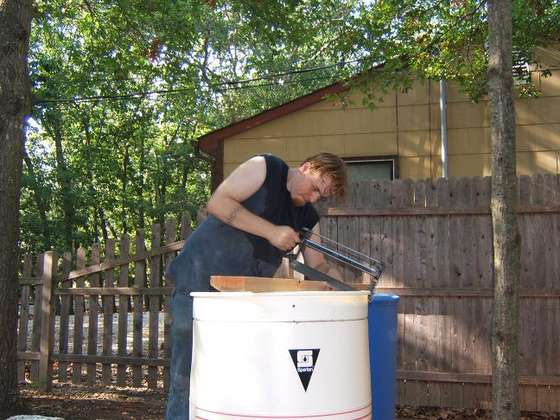 The last two barrel braces and the last two pole braces went in next.

I drilled the pilot holes for the top two barrel braces exactly 25 inches up from the tops of the bottom barrel braces. I drove them in with a ratchet and checked with a level.

The ends of the last two pole braces went up exactly 26 inches from the tops of the top two barrel braces and are held in with screws. 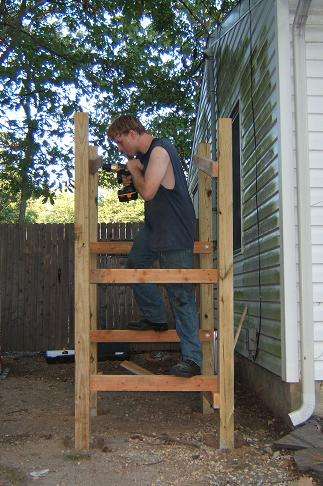 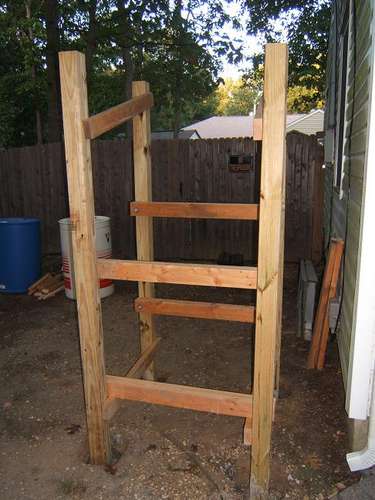 I then tested the frame with two barrels to be sure that they both fit comfortably.

The bottom (and heaviest) barrel is slightly pinched in by the top barrel braces. This adds to the stability of the bottom barrel. 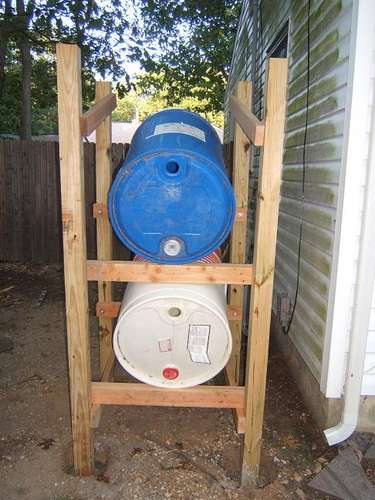 With the two barrels in their final places, I attached additional barrel supports in the fronts and backs of the barrels. All four supports measured 39 inches.

I checked the supports with a level, but did not take an exact measurement of their position. They were placed where I felt that they would support the barrels best.

With the four barrel supports in, the barrels are in their final positions and can not slide backwards or forwards. 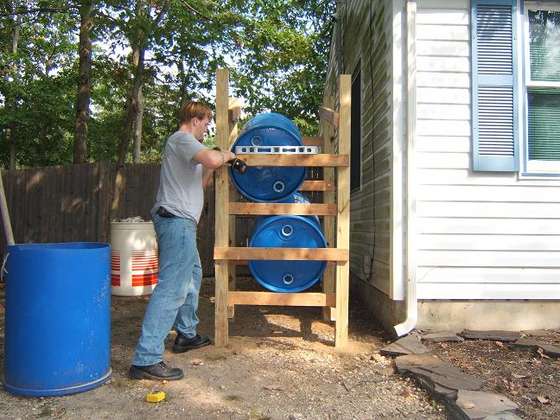 I chose to use barrels with raised lips on the top.

Into the lip of each barrel, I drilled two screws down into the barrel braces. This will help to prevent the barrels from rocking and shifting during bumps or windy days. 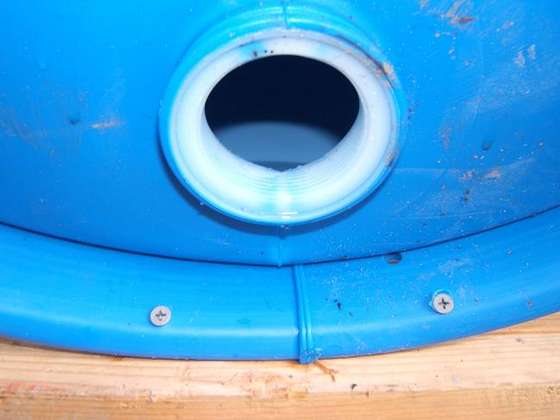 I used a barrel wrench to screw the plugs into the barrel bungs.

The plugs that came with the barrels were already threaded to accept drains and other attachments.

The very top bung did not get a plug as this is where the drain will go later. 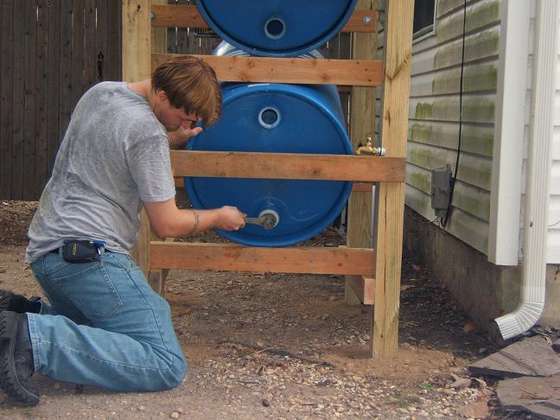 This is what I used to connect the barrels.

I chose these hose bibs because they were a little longer than a standard boiler drain or hose bib. However, most anything would work. To make them fit the plugs, I also needed to use a bushing to adapt them.

Wrap the threads with thread tape and snug with a wrench.

Other parts can be substituted at this point, such as two pipe elbows instead of hose bibs. 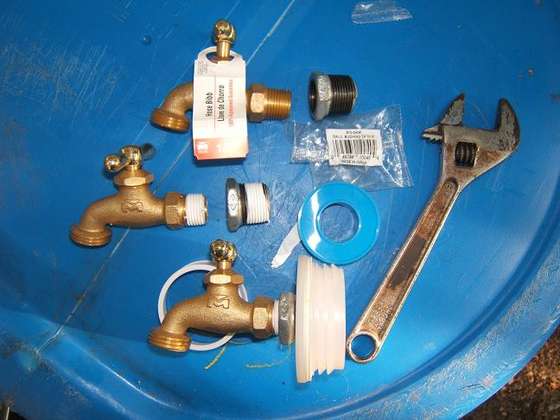 These are the barrels with the hose bibs installed.

Note that the middle hose bib is upside-down to accept the connector hose. 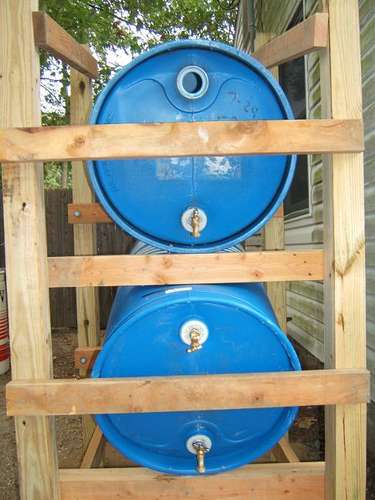 I made the connector hose out of clear tubing and two female hose ends.

The hose ends were in the garden department as replacement parts for mending broken hoses.

Make sure that the hose ends properly fit the hose bibs when shopping for parts, otherwise additional adapters may be needed. 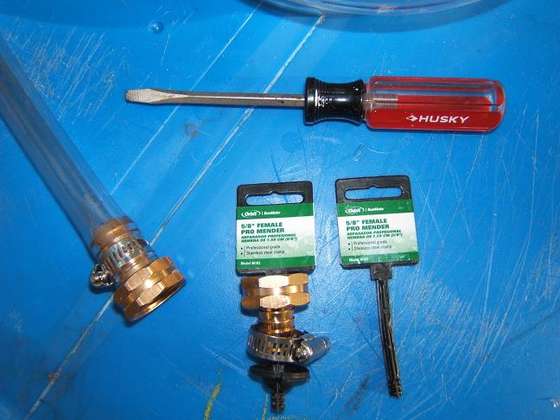 This is the completed connection.

With both hose bibs in the fully open position, water will be able to drain from the top barrel into the bottom. 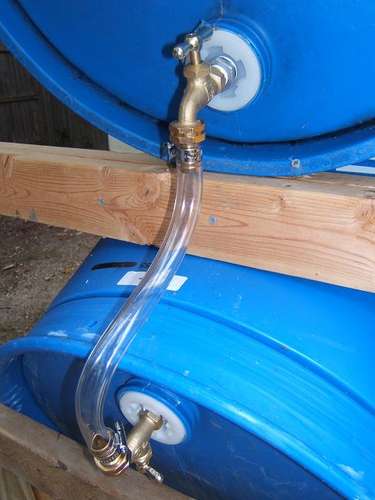 At this point, I decided it was a good time to check for leaks. I filled up the system through the top bung and waited to see if any water leaked out.

I did notice that the top plug was dripping, so I tightened the plug a little more and all was fine. 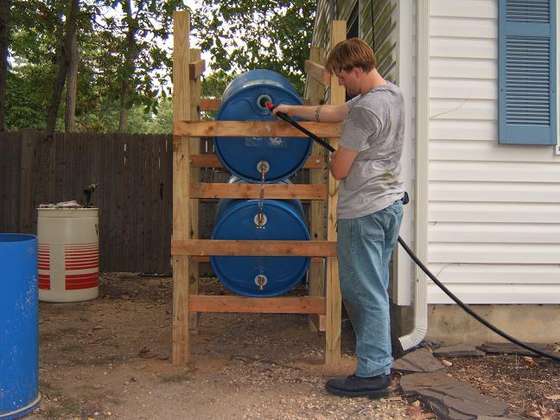 I attached a garden hose to test if I was getting an acceptable amount of water pressure.

There really is no pressure to speak of, since this system is gravity-fed, but the barrels should be installed high enough to get a constant flow of water.

Next, I drained the system and washed it out an additional time to be certain that I flushed out any small debris.

Anybody attempting this may want to consider installing gutter guards like this.

They help to keep debris from clogging the system by just allowing the water in and dropping debris from the roof.

Detach the gutter and measure the width of the spout.

You will need to know this when shopping for parts.

Mine happened to be two inches.

These are the parts that I used to drain water from my gutters into the barrels.

The bungs on the barrels are 2 inches wide and the extra half-inch is to allow water to drain out when the barrels reach capacity.

This is the new gutter drain.

The reducer was clamped on to the spout and the ABS pipe clamped in.

This is what all of the pieces will be built off of.

Dry-fitting all the pipes and various fittings is useful to determine exactly how a drain will be put together.

A person attempting this may want to experiment with what works best as not every setup will need the same parts.

Clean the pipes and fitting and apply ABS glue to cement into place (those using different types of pipe such as PVC will want to use the appropriate type of cement as well).

Make sure the pipe fits and rests comfortably on the barrel. Also, I used a piece of wire nailed to the barrel brace to hold the new drain in place.

You will want to use piping that is less than the size of the bung, otherwise water will not be able to leak out and will back up your gutters, potentially causing flooding problems for a basement or crawlspace.

An optional thing I did was to select a 90 degree bend with an additional outlet. Into that, I cemented a thread and cap. This will act as a temporary override during a storm if the system were to become clogged with debris and cause the gutters to become backed up with water. Simply remove the cap and the excess will spill onto the ground.

This is the completed drain.

Note that it is simple with the least amount of parts used and rests comfortably in the barrel.

I used a reciprocating saw to cut the tops of the posts off, using the top pole braces as a guide.

I then screwed on the roof to the frame.

This is the completed system.

All the instructions from this point on are pretty much optional, since the decoration is up to the builder.

I chose to remove the roof and hang plastic lattice on the sides and back and used 1 1/4 inch finishing nails to hold it in place.

I began using a reciprocating saw to trim the lattice, but later switched to a hand saw because it made more even cuts.

I re-attached and shingled the roof to protect the plywood and make it more attractive. I used 3/4 inch roofing nails for this step.

This is the project completed.

However, I would like to paint the wood with a low- or no-VOC exterior paint at some point to match the house

Page data
Retrieved from "https://www.appropedia.org/w/index.php?title=Don%27s_homemade_rainwater_collector&oldid=619300"
Cookies help us deliver our services. By using our services, you agree to our use of cookies.
Categories:
Maintenance categories:
About Appropedia · Policies · Contact · Content is available under CC-BY-SA-4.0 unless otherwise noted.