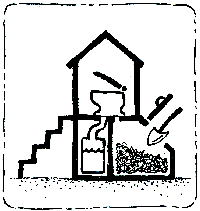 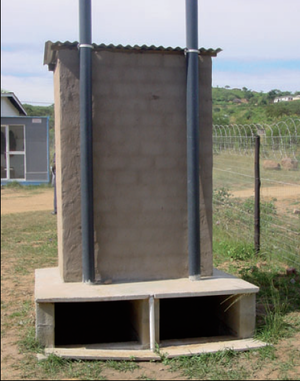 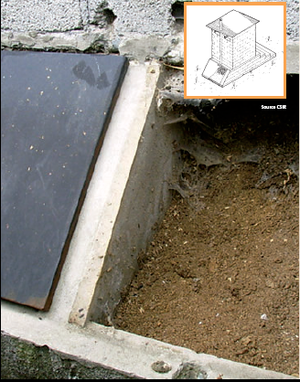 When urine is separated from faeces, the faeces dry quickly. In the absence of moisture, organisms cannot grow and as such, smells are minimized and pathogens are destroyed. Vaults used for drying faeces in the absence of urine have various local names. One of the most common names for this technology is the Vietnamese Double Vaults.

Excreta may dry inside the vault as a result of sun radiation, natural evaporation and ventilation. Absorbents such as lime, ash or dry soil should be added to the chamber after each defecation in order to absorb moisture, making the pile less compact. The product from a dehydration process is a kind of mulch, rich in humus, carbon, fibrous material, phosphorous and potassium. It should be stored, sun-dried or composted in order to kill off all pathogens.

A family of 6 will produce 500L of faeces in approximately six months. For design purposes it is recommended to assume that one person will require almost 100L of faeces storage space every six months. The vaults should be slightly oversized to account for airflow, visitors and the non-even distribution of faeces in the chamber. Each vault is sized to accommodate sixmonths of faeces accumulation which in turn, results in a six month drying time in the out-of-service vault.

The vaults must be watertight to keep the faeces as dry as possible. Chambers should be constructed of sealed block or formed concrete to ensure that rainwater, surface run-off, greywater and urine are prevented from entering the vaults. Urine can be collected in a bucket and discharge to the ground (garden) or stored in a tank for future transport and use.

A vent is required to help keep the vaults dry and control flies and odours.

Dehydration Vaults can be installed in almost every setting from rural to dense urban because of the small land area required, the minimal odours and the ease of use. They are especially appropriate for water scarce and rocky areas. In areas that are frequently flooded, Dehydration Vaults are appropriate because they are constructed to be watertight. Furthermore, where there is no plot of land available, the vaults can be installed indoors, which also makes this technology applicable for colder climates (where leaving the house is less desirable).

Dehydration Vaults can be a clean, comfortable, and easy-to-use technology. When users are well educated and understand how the technology works they may be more willing to accept it as a viable sanitation solution. When the vaults are kept dry, there should be no problems with flies or odours. Faeces from the double vaults should be very dry and relatively safe to handle provided they were continuously covered with material and not allowed to get wet.

There is a risk however when using single vaults, that the top portion of the faeces will not be fully dried and/or hygienized. Single vaults are not recommended (because of the need to handle fresh faeces) and should, whenever possible be upgraded to a double vault.

To prevent flies, minimize odours and encourage drying, a small amount of ash, soil, or lime should be used to cover faeces after each use. Care should be taken to ensure that no water or urine gets into the Dehydration Vault. If this happens, extra soil, ash, lime, or sawdust can be added to help absorb the liquid. Because the faeces are not actually degraded (just dried), dry cleansing materials must not be added to the Dehydration Vaults as they will not decompose. Occasionally, the mounded faeces beneath the toilet hole should be pushed to the sides of the pit for an even drying. Where water is used for cleansing, an appropriate User Interface should be installed to divert and collect it separately. To empty the vaults, a shovel, gloves and possibly a face mask (cloth) should be used to limit contact with the dried faeces.

The material on this page was adapted from:

Tilley, E. et al. (2008). Compendium of Sanitation Systems and Technologies, published by Sandec, the Department of Water and Sanitation in Developing Countries of Eawag, the Swiss Federal Institute of Aquatic Science and Technology, Dübendorf, Switzerland.