Throughout its history, North Korea has faced a variety of food and energy shortages, brought on by its policies of self-reliance, misguided economic policy, and a series of natural disasters. 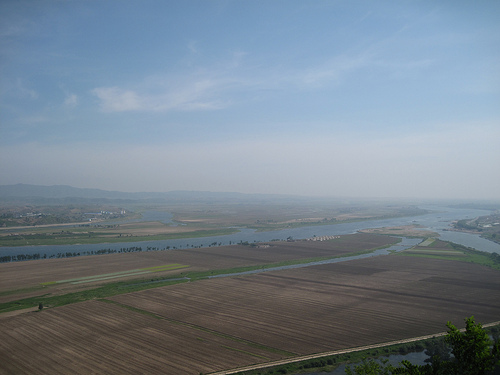 Much of North Korea's forests have been cleared to make way for farmland. Photo courtesy of Bert van Dijk http://www.flickr.com/photos/zilpho/4672991723/

In 2007, it was estimated that North Korea had about 9 million hectares of forests, which accounts for 72.5% of the total land area.[1] Much of the terrain is steep and mountainous, with trees growing on slopes of 20 degrees more.[2] The country has vast deposits of coal, which it burns as a primary source of energy, but no naturally occurring oil or natural gas.[3]

Between 1995 and 1996, a series of floods damaged much of the agricultural land. About 1.3 million hectares of agricultural land was ruined because the land was inundated with water, and sediment left behind made it useless for growing crops.[4] This is partly responsible for the famine in North Korea in the mid 1990’s. As a result, more forest was clear-cut in order to create more agricultural land.

North Korea’s push for self-reliance puts enormous pressure on the country to try to produce its own food and energy. Much of the forest is converted to agriculture and grazing land, in an attempt to meet the population’s growing food needs and combat food shortages. During economic decline, many North Koreans turn to firewood for heat and energy. Between 1990 and 1996, the demand for firewood more than doubled.[6] In 2006, it was estimated that 1.5 million hectares of forest had been deforested.[7] Consumption of forests exceeds replacement levels, so the problem will only get worse. North Korea was recently rated as the country with the third highest rate of deforestation, and was categorized as being under “extreme risk.” [8]

Deforestation is one step in a vicious cycle that worsens North Korea’s environment, economy, and resources. The roots of trees help hold soil onto hills and mountains. When the trees are removed, the soil can easily erode away. This makes the effects of natural disasters, such as flooding, worse, and adds to the sedimentation of farmland. This, in turn, creates more demand for farmland, and more forest is clear-cut. Also, severe flooding can cause coalmines to collapse or wash away. Since coal is North Korea’s primary source of energy, this means that people must turn to firewood for energy, which leads to further deforestation.

All these disasters contribute to economic decline, which leaves little money for investing in restoring or protecting forests for the future. Lack of forests as a natural resource leads to even worsening economic decline.

The North Korean government recognizes the deforestation problem, and has tried to preserve the forest. The Baekdu-san Biosphere Reserve was established in 1989, which served to protect the area of forest and the ecosystem it houses. The Ministry of Land and Environmental Protection is a department responsible for replanting and protecting forests. North Koreans celebrate March 2 as “Tree Planting Day”.