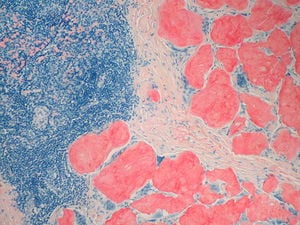 Preeclampsia is pregnancy-induced hypertension, or high blood pressure, and is associated with high protein levels in the urine. While high blood pressure is the most distinguished sign of the disease, it is also linked to damage in several organs such as the kidneys, liver, and endothelium. There is a critical need in the developing world for low-cost diagnostics for preeclampsia. Preeclampsia occurs in as many as 10% of pregnancies, usually in the second or third trimester, and after the 32nd week. It is particularly difficult to diagnose when preexisting disease such as hypertension is present.

The Congo Red Dot urine test is based on a common red dye, Congo red, which is attracted to misfolded proteins. Preeclampsia is pregnancy-specific disease that involves misfolded proteins. The test can identify preeclampsia patients and women who need to deliver their babies immediately. Overall, this test will help identify high-risk patients that should be transported from remote settings to facilities where there is access to specialized care for preeclampsia, such as magnesium sulfate therapy.

This device was tested in the United States. The clinical trial was presented on February 4th, 2010, at the Society for Maternal-Fetal Medicine's (SMFM) 30th Annual Meeting: The Pregnancy Meeting.

This research was funded by the McKern Award for Perinatal Research. Link available here.

The link to the following references available here.