The cocoa tree (Theobroma cacao) is a native of the dense tropical Amazon forests where it flourishes in the semi-shade and high humidities, but wild varieties also occur from Mexico to Peru. The Mayas of Yucatan and the Aztecs of Mexico cultivated cocoa long before its introduction to Europe, and Montezuma, Emperor of the Aztecs, is stated to have consumed regularly a preparation called chocolate made by roasting and grinding the cocoa nibs, followed by mashing with water, maize, anatto, chilli and spice flavours. The richness of this mixture no doubt had some connection with the Aztec belief that the cocoa tree was of divine origin and later led the Swedish botanist, Linnaeus, to give the name Theobroma - Food of the Gods - to the genus including the cacao species. The Aztecs also considered the drink to have aphrodisiac properties.

The genus Theobroma consists of some twenty-two species of small bushes and trees. Theobroma cacao is the only one of commercial value and this species is divided into two main groups: Criollo Forastero There is a third group known as Trinitario which is basically a cross of the two.

The temperature in cocoa growing areas is usually between 30C and 32C. The minimum allowable is temperature is 18C.

Rainfall levels of 1,150 to 3,000mm are required for successful growth.

Soil conditions can vary considerably but a firm roothold and moisture retention are necessary.

It is traditional for cocoa to be grown under shade trees although such conditions resemble those in its natural habitat it has been shown that higher yields can be obtained without shade if sufficient moisture and nutrients are made available.

Propagation by seed is the most economical way of increasing stock but vegetative methods can also be used and these provide a more consistent and reliable method of reproducing trees of particular strains. 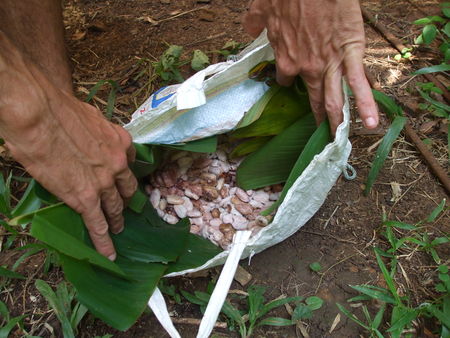 Cocoa beans are fermented not just to remove the adhering pulp but also develop the distinctive flavour of cocoa. Correct fermentation and drying of cocoa is of vital importance and no subsequent processing of the bean will correct bad practice at this stage. A good flavour in the final cocoa or chocolate is related closely to good fermentation but if the drying after fermentation is delayed moulds will develop which will produce very unpleasant flavours.

After the pods are cut from the trees the beans with the adhering pulp are removed. Fermentation is carried out in a variety of ways but all depend on heaping a quantity of fresh beans with their pulp and allowing micro-organisms to ferment and to produce heat. Most beans are fermented in heaps. Better results are obtained by the use of fermentation boxes which give more even fermentation. Fermentation takes five to six days. Forastero beans take rather longer to ferment than Criollo. During the first day the adhering pulp becomes liquid and drains away. By the third day the mass of beans will have fairly even heated to 45 C and will remain between this temperature and about 50C until fermentation is completed. It is necessary to occasionally stir the beans to aerate and Cocoa and Chocolate to ensure that the beans initially on the outside of the heap are exposed to temperature conditions prevailing in the interior.

After fermentation the beans are placed in shallow trays to dry. In some growing areas where the main harvest coincides with the dry season, sun drying is adequate. The beans are dried by being spread out in the sun in layers a few centimeters thick. Sun drying trays may be movable on rails so that they can be pushed under canopies. Where the weather is less sunny, artificial driers are used. There are numerous types of dryers but an essential feature of all must be that any smoky products of combustion do not come in contact with the beans otherwise taints will appear in the final product. Some systems involve the complete combustion of the fuel so that the flue gases can be used to dry the beans. Cleaning The beans are cleaned to remove the following extraneous matter: bean clusters and other large pieces using rocking and vibratory sieves; light material like dust, loose shell and fibre using a gentle upward air stream; iron particles using a magnetic separator and stones and heavy material using a fluidised bed with air aspiration to lift the coca beans. It may also be necessary to grade the coca beans according to size to ensure even roasting.

This is the most important stage in the development of flavour. This can be achieved by roasting the whole bean, the cocoa bean cotyledon or even the ground cocoa bean cotyledon (cocoa mass). For chocolate production the roasting temperatures are 100C to 104C. For cocoa powder production higher temperatures of 120 to 135C are used. There are many designs of roasters: both batch and continuous systems. The operation is controlled so that:

After roasting, the beans are cooled quickly to prevent scorching Crushing The shell will have been already loosened by the roasting. The beans are then lightly crushed with the object of preserving large pieces of shell and nib and avoiding the creation of small particles and dust. The older winnows used toothed rollers to break up the beans but modern machines are fitted with impact rollers. These consist of two hexagonal rollers running in the same direction that throw the beans against metal plates . The cocoa bean without its shell is known as a cocoa nib. The valuable part of the cocoa bean is the nib, the outer shell being a waste material of little value. Winnowing The crushed material is winnowed to remove the broken pieces of shell. This is achieved by sieving and blowing air through the material.

Alkalisation is a treatment that is sometimes used before and sometimes after grinding to modify the colour and flavour of the product. This was developed in the Netherlands in the last century and is sometimes known as Dutching. This involves soaking the nib or the cocoa mass in potassium or sodium carbonate. By varying the ratio of alkali to nib, a wide range of colours of cocoa powder can be produced. Complete nib penetration may take an hour. After alkalization the cocoa needs to be dried slowly. Grinding The cocoa nib is ground into cocoa liquor (also known as unsweetened chocolate or cocoa mass). The grinding process generates heat and the dry granular consistency of the nib is turned into a liquid as the high amount of fat contained in the nib melts.

Cocoa butter can be extracted using extrusion, expeller, or screw presses. Cocoa butter can be produced from whole beans, and mixtures of fine nib dusts, small nibs, and immature beans. Sometimes, whole nibs are pressed when the expeller cake is needed for the manufacture of coatings and therefore must be free from shell and as low as possible in cocoa butter content. When pressing whole beans, very light roasting or even no roasting is needed, and this gives the mild-flavoured cocoa butter that is desirable for milk chocolate. Hydraulic presses Hydraulic presses are used to produce cocoa powder and cocoa butter. Cocoa powder can be prepared by the hydraulic pressing of finely ground cocoa liquor. This can be achieved by compressing the liquor in heavy steel pots until a predetermined amount of cocoa butter is squeezed through very fine mesh screens or filters situated at each side of the pot. The pots, each with a capacity of about 18kg, are mounted in a horizontal frame and the cocoa liquor, heated to 93-102C, is pumped in at a pressure of up to 300lb per square inch. Cocoa butter immediately starts to be forced out through the filter screens and when the pots are full the pressure pump is turned off and a hydraulic ram set in motion. A pressure of up to 6000lb per square inch is then applied. Cocoa butter runs from the pots to a trough and eventually to a collecting pan situated on a balance. When the required amount of cocoa butter has been extracted the ram is reversed to the starting position, the press pots open up and the cocoa cakes from each pot are deposited on a conveyor and taken away for grinding. The extracted cocoa butter will need to be cleaned to remove non-fat solids in suspension, this can be done by filtration or centrifugally. Cocoa butter produced by this method is normally a very pale yellow colour and it sets at a fairly hard fat showing crystal formation. Its melting point is 35C (Glossop, 1993).

Cocoa beans for expeller pressing are either very lightly roasted at low temperatures or not roasted at all. They may be just warmed sufficiently to loosen the shell. The beans are steamed before being fed to the press to soften them and help release the cocoa butter. Basically the expeller press consists of a tapering tube perforated along its length in which is situated a rotating screw. The cocoa beans are fed into the tube where they are subjected to shearing and increasing pressure by the action of the rotating screw. Cocoa butter is forced out through the perforations in the tube. The tube is terminated by an adjustable cone which gives a variable gap between the tube and the cone. Thick flakes of expeller cake are extruded through this gap. The extracted fat must be filtered or centrifugally separated to remove cocoa solids. Expeller cake contains 8-9 percent fat and this can be extracted using organic solvents. Solvent extraction Cocoa butter can be produced at the large scale by solvent extraction. It should be noted that it is unlikely that solvent-extracted cocoa butter would alone account for the added cocoa butter in a chocolate. Generally, it would be incorporated in a butter blend at the rate of 2 to 5 percent. The production of cocoa powder The cocoa powder is taken from the press as a cake. It is broken in a mill. The resulting powder is sieved through fine silk, nylon or wire mesh. Most cocoa powders are made from mass which has been treated with alkali with the purpose of controlling the colour of the powder and improving the dispersability.

To produce plain chocolate. mass is mixed with sugar and sufficient cocoa butter to enable the chocolate to be moulded. The ratio of mass to sugar varies according to the national taste. Melenging The mixture is ground to such a degree that the chocolate is smooth to the palate. At one time this was done by a lengthy process in melengeurs - heavy granite rollers in a revolving granite bed - but nowadays grinding is done in a series of rolls.

After grinding the chocolate is conched. The original conche was a tank shaped rather like a shell in which a roller is pushed to and fro on a granite bed. During the conching process which may last for several hours the chocolate is heated, this helps to drive off volatile acids, thereby reducing acidity when present in the raw bean, and the process finishes the development of flavour and makes the chocolate homogeneous. Tempering After conching the chocolate has to be tempered before it is used for moulding. Tempering involves cooling and reaching the right physical state for rapid setting after moulding.

Similar processes are involved in the manufacturing of milk chocolate. The milk is added in various ways either in powder form to the mixture of mass, sugar and cocoa butter, or by condensing first with sugar, adding the mass and drying this mixture under vacuum. This product is called crumb and this is ground and conched in a similar manner to plain chocolate.