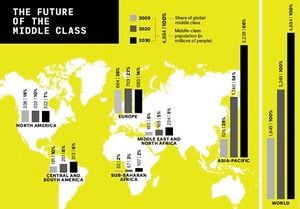 Fig1:The global middle class is projected to more than double over the next 15 years, with almost all of that growth in the fast-developing economies of China and India. As Western economies stagnate, the balance of world power is poised for a profound shift. (Kharas and Gertz, "The New Global Middle Class," in China's Emerging Middle Class, 2010) (Percentages may not add up to 100 because of rounding)
Location data

The Chinese middle class are those with an annual income of between 10,000 to 60.000 US dollars. These are people living in big cities with relatively stable jobs with college degrees. This growing class will bring both challenges and opportunities to China.

China is in the midst of the largest agrarian reforms in world history. China's middle class is larger that the population in the United States. China is expected to overtake the United States as the world's biggest economic power within the next five years.

The nations' rising affluence will have a significant impact on the fate of the planet. Overpopulation can be seen as a road block to economic development. Rapid growth puts a substantial strain on the government's ability to meet the needs of its people. Rising incomes and a growing middle class are poised to drive consumption growth in the world's second-largest economy, with significant economic implications for the rest of the world.[1]

Farmers produce the bulk of China's food. They produce wheat in the spring and corn in the fall. Farmers may soon not be able to produce enough food to satisfy China's growing demand. China must now make the most of its limited farmland. The fear that China may no longer be able to produce food for its people strikes fear and rattles the Chinese government. In 2011 the Chinese government announced a five-year plan to radically overhaul the Chinese system and relocate 250 million farmers to cities. The leaders in Beijing today remember the great famine of 1959-61 when 37 million people starved to death. Today the government is no longer worried about starvation but satisfying a affluent and growing middle class that wants to eat like Americans.

The communist party wants to keep people happy. This one-party state's legitimacy depends on its ability to deliver economic prosperity and consumer satisfaction. Consumers increasingly want to eat meat. Meat is very resource intensive and puts even more pressure on China's strained farms. China will not likely be able to be self-sufficient and will have to import a large quantity of foods from all over the world.

China consumes 50% of the worlds pork and growing steadily. Every two or three years China's consumption demand grows by the whole size of the United States market. China is pushing to replace family farms with large scale companies because of fast production and the easier ways to monitor food safety. The government is rapidly overhauling China's food industry, closing half of its slaughterhouses in the next year. The rapid increase in meat production has resulted in devastating environmental damage, another issue rattling the Chinese government. China estimates that three quarters of its water is polluted and nearly half of that pollution comes from agriculture. All agricultural waste makes its way down China's rivers including to its lakes and out into the ocean leading to wide spread and toxic algae blooms affecting fisherman. Large meat producing companies may help tackle pollution with modern waste management and by building environmentally friendly facilities.