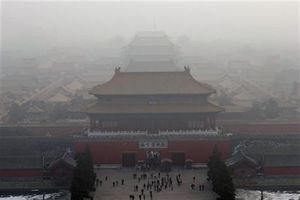 In recent years China's Air Quality has caused public concern and outcry. Due to the severity of the pollution Surgical masks are a common sight in cities and smog surrounds buildings. Though municipal officials in Beijing have declared the 14th year of continuous improvement air quality in 2012[1] many are still unsatisfied with the current conditions. This is much in part to the government declaring some statistics 'state secrets' inaccessible to the public such as the case of attorney Dong Zhengwei attempt at receiving a 2006-2010 national study on soil samples[2]

One of the first globally noted indicators was the establishment of an air monitoring system in the United States Embassy in Beijing in 2008. Not only was this a system that provided uncensored reports of hourly air quality via Twitter but it was also the first published reports of PM2.5 measurement. PM stands for particulate matter, those less than 2.5 micrometers in diameter are referred to as PM2.5. The size category of PM2.5 consists of particles small enough to cause breathing problems and get deep into lungs.[3] In Beijing, the lung cancer rate has increased by 60 percent during the past decade, even though the smoking rate during the period has not seen an apparent increase, said Mao Yu, deputy director of the Beijing Health Bureau.[4] Until early 2012 the Chinese government had only released PM10 measurements which resulted in a rating of Excellent or Good 80% of the time for 2010-2011 on their scale of PM Quality.

The Beijing Embassy Twitter has caused some outrage in the Chinese Government since it's implementation in 2008. Chinese Foreign Ministry official Wang Shu'ai prompted the embassy to stop the Twitterfeed in July 2009 citing that "is not only confusing but also insulting," at a meeting with US delegates.[6] The new Chinese PM2.5 scale instituted in 2012 came in part of the outrage drawn from the Beijing Embassy Twitter though major cities had the technology to use PM2.5 measurement before it's official government release. Although the methods used to alert the public of the issues at hand remain restricted Li Keqiang, the new prime minister, issued a statement the air pollution has caused him "show even greater resolve and make more vigorous efforts" in regards resolving air issues.[7]

The Future of China's Air Quality seems uncertain with reports of positives and negatives on the horizon. According to Shi Yuankai, vice-president of the Chinese Academy of Medical Sciences Cancer Hospital, "Even if we can manage to keep the country's smoking rate flat, the lung cancer rate is expected to keep rising for 20 or 30 years and worsening air pollution could be the major culprit,".[8] In the most recent session of the National People's Congress Yan Chengzhong, a delegate, thought that the government will be more receptive to information about environmental issues. "At this meeting, there've been very strong voices concerning the condemnation of the bad environmental situation," Yan said. "I think these kinds of voices can be accepted by the new authorities. It's a favorable opportunity for the new leaders to do something different."[9]