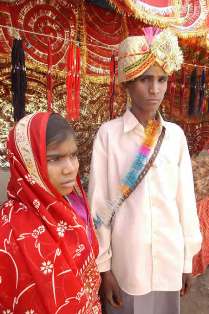 As a long-standing societal issue in India, a recent study showed that approximately fifty percent of Indian women get married before reaching the legal marriageable age of 18. The term "child marriage" refers to people marrying before 18 years-of-age and has been increasingly viewed as a violation of human rights.[1] Although the average age at the time of marriage among women in India is 20.2 years [6], it compared poorly when you compare it with that of developed economies.

Pregnancy as a Result of Child Marriage[edit | edit source]

This chronic problem facing India has lead to early pregnancies as well. Azad's study showed that 47 percent of young women had their first pregnancy before they turned 18 as a result of early marriage. Another study performed by The Lancet, a worldwide medical journal, showed that nearly all the women who were married before they reached the legal age of 18 reported that they used no contraception before they had their first child.[3]

The rise of pregnancy among these teenagers is bringing forth increasing problems in adolescent mothers; they are being faced with complications such as obstetric fistula [3]. The dangers of being a young mother also increase the risk of death during childbirth. Girls 17 and under are two to four times more likely to face death during childbirth than that of a 20-year-old.[4]

The ICRW (International Center for Research of Women) created the 'International Protecting Girls by Preventing Child Marriage Act of 2009'. This is a bill that authorizes U.S. foreign aid to help young women with more educational options and career opportunities. The act establishes a multi-year effort to steer young women clear of child marriage. The act would require reports from the State Departments about the issue in their annual human rights report and necessitate more prevention programs.[5]

Page data
Retrieved from "https://www.appropedia.org/w/index.php?title=Child_Marriage_in_India&oldid=650715"
Cookies help us deliver our services. By using our services, you agree to our use of cookies.
Categories:
About Appropedia · Policies · Contact · Content is available under CC-BY-SA-4.0 unless otherwise noted.