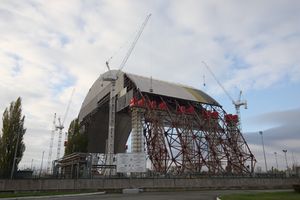 The New Safe Confinement, or NSC, is a structure that is being built in order to cover and contain the aftermath of the 1986 Chernobyl disaster.

This disaster leaked radioactive material into the environment and was contained with a structure called a sarcophagus shortly after it happened, but the sarcophagus was only a temporary fix that later showed to be deteriorating. The NSC, when completed, will prove to be big enough and sturdy enough to contain the radioactive material for up to 100 years. It will also allow for the deconstruction of the old sarcophagus within the confinement. [1]

The Chernobyl disaster happened on August 26, 1986. A fault in reactor four of the Chernobyl nuclear power plant reacted in an explosion and then fires which killed many and sent radioactive material out into the atmosphere. The ash the came from the fires covered a significant portion of Europe and traces of radioactive material were found as far as the US and Japan. To contain the disaster a cover, later known as a sarcophagus, was placed over the defected reactor in order to stop the leak.
Thousands of people were relocated away from affected areas. Towns were left stranded and bulldozed down not to be vacated again. The radioactive ash that covered the surrounding areas after the explosion washed into the soil from rain creating a cycle of radiation through the ground, plants and animals populating the land. Series of illnesses also passed through generations of people affected by the disaster.
Decades later the plant and surrounding area is still highly radioactive and the sarcophagus has grown weak. The NSC will contain the unit 4 reactor and it’s sarcophagus for up to 100 years and is projected to be completed in 2015. [2]

The NSC has had many setbacks and has cost billions of dollars, but the necessity of completing it has seemed to outweigh the time and money.
Around 40 different governments around the world have contributed to this project creating a fund of around 1.5 billion dollars.[3] [4]The structure being built is in the shape on an arch as tall as the statue of liberty, about 350 ft tall, and around 850 ft wide. At the end of construction the arch, made of mostly concrete and metal, will weigh around 30,000 tons.
Despite the size of this structure, the process of building it is extensive and dangerous. With the current sarcophagus being worn down by the contents it contains the arch being constructed cannot be built on top of it. Workers in the area can only be exposed to so much radiation within a year. Working above the sarcophagus for more than 12 minutes can dose a worker with more than enough radiation than one should be able to handle in a year. With those kinds of limitations, the arch is being constructed near unit 4 reactor and is to be moved over the sarcophagus after it is completed.[5][6] [7]

At this point in 2014 the arch is halfway completed. If plans continue as hoped the site will be contained and the arch in place sometime in 2015. Though even with the NSC in place the nuclear waste underneath will still need to be disposed of in time.