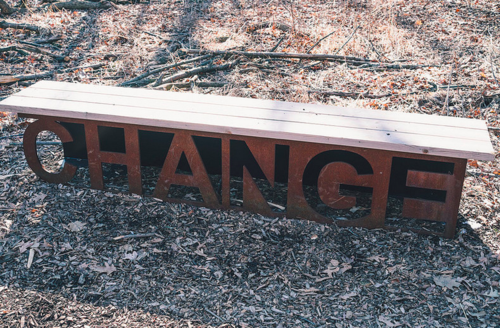 The secret of change is to focus all of your energy, not on fighting the old, but on building the new ~ Socrates

Change is a constant. The ecosystems, the populations of species, the interactions of communities, the whole biosphere are subject to change. The workplace, human community linkages, laws, economies, history and societies are subject to change. Nature's forces of both the living and nonliving are always shifting and reacting to each other, creating change. Change itself is a certainty, even if we cannot be certain of what the change will be or what it will entail.

Many disciplines and fields of study are interested in change and its effects, including ecology, philosophy, theology, economics, psychology, law, sociology, biology, mathematics, physics, chemistry, history, management and business, technology, the arts, literature, linguistics, and many more.

You can study, analyse, observe and record change in many different ways, through differing lenses, dependent on your background, stance, interest and desired outcome. The lens through which you view change will influence how you perceive it, and whether or not you view it as a positive or a negative occurrence, or as neither but just as a reality that is, something to be lived through and adapted to. The perspective you take on change can lead you to work with or against it, to make use of it, to try to avoid it or to accept its inevitability.

Change can also be a very personal, internal journey, an experience of waking up and wanting to change your own direction or values, of wanting to change the person you perceive yourself as currently. For some people, this can be viewed as a betrayal of a static, "I am who I am" personality, or trying to be someone you're not. Yet, a more holistic and flexible viewpoint recognizes that human beings grow throughout life and change, shedding old ways of being that no longer serve a purpose in a different decade or so of life. Problems can arise where an inability to allow for personal change can lead to lack of fulfilment and stubbornness to stick with things that aren't working.

Transitions are the phases between old ways of being, doing and representing to new ways of being, doing and representing. Transitional phases can be gradual and subtle or sudden and abrupt. A transition can also be drawn out or occurring in ways that make it hard for those in the middle of the ongoing changes to perceive the importance or ramifications of the changes occurring until a major shift has occurred.

The concept of the change agent[edit | edit source]

The change agent is mentioned a lot, some of it being management speak. It'd be good to address the concept here, in the context of broader social-ecological change.

It is of interest to note the tags on the Wikipedia articles - they seem to be mired in "multiple issues". I'd not recommend bringing that content over/necessarily being influenced by it, but rather aim for an original, more holistic take on the concept of change here. However, it's useful to note the links here (there are more if you search for "Change" in WP).

TBC - perhaps some useful resources and reading as a list here?

To be continued[edit | edit source]

(This is a work-in-progress, with the hope others will add their thoughts about change from varied perspectives.)