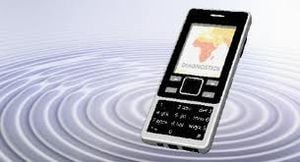 Diagnosing malaria through blood detection can often times be difficult because not many cells in the blood will contain malaria.

Different cells respond to surface acoustic waves in different ways. Response to different frequencies is dependent upon elasticity and shape of the cells. Malaria changes the elasticity and shape of red blood cells. Surface acoustic waves are used to sort out the cells infected by malaria from those that aren't. The waves are emitted utilizing a cell phone.

This device can be utilized using mobile phones which are readily available in many developing settings. It can be used to diagnose malaria in any area that it is needed where mobile phones are available.

The following people were involved in the design from the University of Glasgow:

The Bill & Melinda Gates Foundation provided $100,000 for this endeavor.