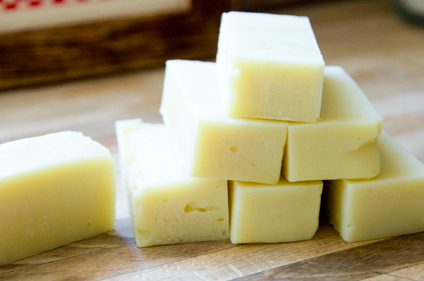 Castile soap is soap made from vegetable oils (often olive oil).[1] The term "Castile" is based on the region in Spain known for its olive oil, which was originally turned into soap with the addition of animal fat.[2][1] Animal fat is no longer added to modern versions of the soap, which is now made from such oils as olive, coconut, jojoba, palm and hemp.[1] The recipes used to make castile soap are often centuries old.[1]

Castile soap is gentle on the skin and can be used by a wide range of people without reaction to it.[1] It is also good for the environment, as it doesn't contain such ingredients as foaming agents, artificial colours, deconstructed fatty acids, petrochemicals or anti-bacterial agents.[1]

Castile soap can be used for cleansing the skin (body wash), washing the hair as a shampoo, and turned into a cleanser with the addition of such items as borax, baking soda and vinegar.[3] It can also be used for laundry purposes and as a window cleaner, with the addition of some basic ingredients.[3] It is a good soap to use when camping, for it has low environmental impact.[1]