There are two categories of brown sugar: those produced directly from the cane juice at the place of origin and those that are produced during the refining of raw sugar. The first type includes a variety of molasses and syrups, demerara, muscovado and turbinado sugars. The second type is coated brown or 'soft' sugars, manufactured demerara, and a variety of refinery molasses and golden syrups.

Those produced directly from the cane juice at the place of origin can be made using relatively low-cost and low technology processes suitable for small-scale production However, this level of production still requires experience, skill and knowledge to be successful. The technology involved is based on the open pan production which is described in the Practical Action's technical briefs on gur and the open pan sulphitation (OPS) sugar processing.

The refined brown sugars are produced in modern vacuum pan (VP) sugar factories which are capital intensive and have high throughputs and are not suitable for small-scale production.

The brown sugar types can be further divided into those where the crystals are separated (centrifuged) and those that are not separated (non-centrifuged) from the molasses.

The following sugars can be produced using relatively simple low-cost technologies that are currently in use in India, Pakistan, Bangladesh, East Africa and South America. In all cases these sugars can also be produced in medium and large factories.

A syrup is a liquid sugar made using relatively simple production processes. The cane is crushed using roller type crushers extracting the juice and discharging the waste bagasse. The juice is collected in containers and allowed to stand for a few hours before use, to allow particles and fines to precipitate out. The juice is then poured into the boiling pan through a coarse cotton cloth to filter out remaining particles.

If possible the juice should be allowed to stand in tanks for 24 hours to settle out bagasse and other solids that may have contaminated the juice. Tanks should be fitted with a mesh lid, through which the juice is poured, which acts as a filter.

The boiling pan is located on top of a furnace that uses sun-dried bagasse, from the crushing operation, as fuel. Further clarification can be undertaken by adding a small amount of vegetable or chemical matter that coagulates during heating, trapping particles and contaminants and bringing them to the surface during boiling. This 'scum' can then be skimmed off and discarded.

The juice is boiled until the required concentration is reached, around 105°C when most of the moisture has been boiled off and crystallisation begins. The viscous juice (massecuite) is then removed, a step known as the 'strike', and allowed to cool before bottling.

Care is needed during boiling as over-boiling will cause crystallisation and under-boiling will result in too much water remaining in the syrup which could lead to contamination or rapid deterioration of the product.

In Asia, Africa and South America non-centrifugal sugars are made for direct consumption and are known by a range of names: gur in India and Bangladesh, desi in Pakistan, jaggery in Africa, and panela in South America. These sugars are a concentrated product of the cane juice without separation of the molasses and crystals. It can vary from golden brown to dark brown in colour and contains up to 50% sucrose, up to 20% invert sugars, moisture content of up to 20%, and the remainder made up of other insoluble matter such as ash, proteins and bagasse fines.

In most cases this sugar is produced using open pan boiling techniques, either in a single open pan (see figure 1) or in a series of pans (figure 2) that are located above a furnace.


The boiling pans can be round or rectangular depending on furnace design and local tradition. In all cases, fuel is provided by dry bagasse from the crushing operation and sometimes additional fuel, such as wood, may be required to complete the boiling.

Before boiling the juice is allowed to settle and some clarification is carried out by adding vegetable matter to coagulate the particulates which come to the surface during boiling and are skimmed off. In some of the larger factories especially in India, the juice is often filtered and chemically clarified before boiling commences.

In Bangladesh it is common for the product, during cooling, to be poured into clay pots which are used to transport it to market. The pots are then broken and the product removed and sold by weight. In India, Pakistan and African the product is usually poured into small rectangular moulds and in South America the product is formed into round cakes approximately 150mm in diameter.

If sodium bicarbonate, diluted in raw juice, is added during cooling the product will become powdery and can be packaged in small bags as a crystal sugar substitute.

A basic raw crystalline sugar, developed in India, that has been separated from most of the molasses. Khandsari, varies in colour from golden yellow to brown and contains between 94 and 98% sucrose.

It is produced by the small to medium scale sector and has a considerable market in India. At its most basic, khandsari is manufactured using simple animal-drawn crushers, is subjected to simple clarification, boiled to the consistency of a thick syrup, and allowed to stand until sugar crystals are formed. The small crystals are then separated in manually operated centrifuges and sun dried.

At the other end of the scale, the production plant can use diesel or electrically driven crushers, crystalliser to ensure even formation of crystals, power-driven centrifuges, and forced-air driers to dry the product. Factories processing between one and two hundred tonnes of cane per day are common yielding between 6.5 and 13 tonnes per day respectively.

Named after the area in Guyana where it was first produced, demerara is a centrifuged sugar prepared from the first crystallisation of cane syrup and has large yellow crystals and a slightly sticky texture. Production of this sugar is not suitable for the small sector as the juice needs to be carefully clarified to ensure purity and crystalliser are required to ensure uniform grain size. 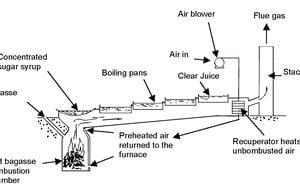 Also known as Barbados sugar, muscovado is the product of the third crystallisation. It is dark brown in colour with small grains and sticky texture.

A by-product of both the OPS and VP scale of production, it tends to be produced as an alternative to white sugar if the standard is not very high.

Large-scale sugar production is anything over 500 tonnes of cane processed per day and uses modern VP technology. However, due to the high capital cost of the technology it is usual for plants to be capable of processing at least 1000 tonnes of cane per day.

All of these sugars are produced during the refining of raw sugars and are known as "soft" sugars because their small, free-flowing grains give the impression of a soft texture. These are produced by boiling crystals from a dark massecuite or by coating refined sugar with a thin film of molasses, known as painted or London brown sugars (where the system was first developed). In some cases, caramel and invert sugars are added in small amounts to enhance the colour and texture. These sugars tend to be produced by the large-scale white sugar manufactures and not by the small to medium-scale producers.

Page data
Retrieved from "https://www.appropedia.org/w/index.php?title=Brown_sugar&oldid=600729"
Cookies help us deliver our services. By using our services, you agree to our use of cookies.
Category:
Maintenance categories:
Comments
Privacy policy · About Appropedia · Disclaimers · Mobile view · Content is available under CC-BY-SA-4.0 unless otherwise noted.
</html