Many food products, such as jams, drinks and sauces, are hot filled into glass containers directly after cooking or pasteurisation. Unlike tin cans, hot glass cannot be directly placed into cold water to cool for fear of breakage due to thermal shock. Forced cooling of such hot filled foods is, however, generally recommended to reduce changes in product colour and flavour. Some products are much more sensitive than others to changes of this type.

In many small-scale production units, hot containers are simply allowed to air cool and this may take several hours. The situation is often made worse, in that in order to save space, the bottles are piled into stacks and so cool even more slowly.

In larger manufacturing plants, hot, closed bottles are passed through continuous coolers in which they meet zones of water sprays of gradually reducing temperature, thus overcoming the problem of thermal shock. Such coolers are large, complex and expensive.

A simple, cheap system was developed in the St Vincent Ministry of Agriculture's Production Unit to allow controlled cooling of both bottled fruit drinks and jam jars, with production rates being typically 50 to 150 packs per hour. 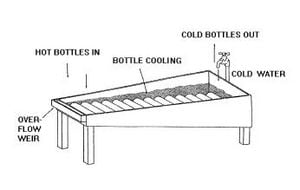 The basic system, see Figure 1, consists of a long water tank set-up in such a way that it automatically develops zones of different temperature along its length, or a temperature gradient. The tank was constructed from galvanised iron sheet and was supported in an angle iron cradle. The total length was 12ft and the width, in order to accommodate the largest bottle used was 13 inches. The base of the tank was sloped to increase the depth of water from 0-8 inches along the length.

Mains water was fed continuously to the deep end of the tank, together with a controlled drip of chlorine solution. The use of chlorinated water for bottle cooling is essential because when a hot filled pack is first capped, the seal is never perfect. As the pack cools, the glass and the metal cap seal firmly together and an internal vacuum forms. In effect, this means that in the early stages of cooling the outside medium, whether it is water or air, can be sucked into the container by the gradually forming vacuum.

Obviously, if this external medium is contaminated, the contents will become liable to spoilage. Hence, the necessity for immersing the packs in the well-chlorinated water. To avoid corrosion of the metal cap caused by chlorine, it is recommended that its level be controlled at 1ppm. In Figure 1, it can be seen that the chlorine solution is metered from a small feeder tank with an adjustment clip and it is necessary to carry out periodic free chlorine checks using readily available and simple to use kits.

The system suffers from one slight inconvenience in that at the start of the day the tank has to be filled with warmed chlorinated water to avoid damage to the first packs of the day that enter. The cold main is then turned on and adjusted to give a steady overflow from the shallow end of the tank. Hot bottles can then be placed in the tank. Within a few minutes the system will stabilise and it will be found that the deep end of the tank is cool and the water leaving the shallow end hot. 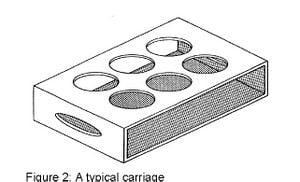 It is more convenient to remove the packs when they are still slightly warm to the touch as the residual heat will cause rapid drying of the glass surface and reduce the time delay before labelling. The cooling of jams and jellies requires a somewhat different technique as they need to remain steady and upright while cooling so as to allow gel formation. To overcome this problem, a series of wooden carriages were used in St Vincent that were simply pulled through the tank by means of a metal hook. A typical carriage is shown in Figure 2.