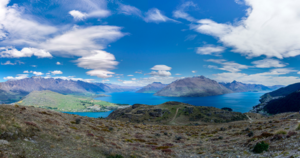 Species concentration is uneven around the globe, and some areas have much higher concentrations of biodiversity than others. Biodiversity hotspots are biogeographic areas where there are high levels of endangered biodiversity under considerable threat from human activities and policies (or lack of protective policies/legislation). Concentrating efforts on such regions with high levels of biodiversity that are endangered allows for greater impact in preserving the biodiversity (due mainly to the pragmatic reality that finding funding to preserve all biodiversity everywhere is likely to be a major challenge). Biodiversity hotspots are not just land-based but can also be found in the ocean, especially with respect to coral reefs.

Currently there are 35 to 36 biodiversity hotspots around the world.[1][2] They cover 2.3 percent of the Earth's land surface.[2]They contain a very high level of endemic species.[2]

Hotspots tend to be the most important and diverse ecosystems in the world.[1]There is a direct correlation with the needs of local people who depend on nature for survival and these hotspots.[1]

What makes a region a biodiversity hotspot?[edit | edit source]

There are specific criteria for a biodiversity hotspot: