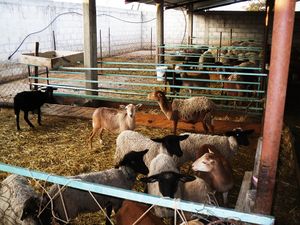 Site follow up and continued community visits are an important step to ensuring that any appropriate technology is being used to its optimum performance by users and to ensure that the technology is working outside lab conditions, both in the natural environment and within the community. While millions of cheap plastic bag biodigesters designs have been installed all around the world, now many researchers agree that there is a low reliability in the design, with the primary problem being un-repairable gas leaks. (Eaton, 2009) Researcher Alex Eaton, doing site visits to follow up on 64 installed systems in Mexico, found only 20 systems still functioning with the main reasons for failure including: damage to the plastic that holds the gas and waste effluence, general neglect, and a lack of follow‐up and proper system maintenance. (Eaton, 2009) In response Eaton, founder of Biobolsa and head of the biogas program for IRRI, designed a biodigester out of strong geo textile to endure damages, proposed using greenhouses to protect the biodigester, and created a site visit-follow up program where families with installed systems would periodically be visited by the biogas team to receive system analysis, follow up help, and guidance for the first two years after installation.

International Renewable Resources Institute-Mexico (IRRI) works with a number of renewable and efficient energy technologies, water treatment and purification systems, and agricultural management strategies in order to address the complex environmental challenges that Mexico and the world face today. We offer a wide variety of courses, consulting services, project management, and products in order to build human capacity and promote direct positive environmental change. Through strategic alliances with community members, government and non-governmental organizations, and educational facilities we are able to provide a wide network of services without forgetting the importance of the individual personalities of each project. This is one project page on a series of pages on biodigester creation, management, maintenance, and testing with IRRI. Click here for the main page to their research and projects.

1.Is the system producing gas and how many hours a week?[edit | edit source]

This is a direct display of system performance and the amount of gas generated depends on a variety of factors including the number of animals, the type of animal waste input, how long ago the system started up, if there is room for gas in the biodigester , and the design characteristics discussed above.

2.How many animals are having their waste used for the system?[edit | edit source]

The number of animals can often change in a family and having a base amount of conitinual waste is needed in order to produce gas and fertilizer. Often animals such as pigs act as “bank accounts” where extra food can be deposited in times of excess and during tough times these animals can be sold or eaten. Animal fluctuations should be expected in smaller backyard operations with families with lower income.(Eaton, 2009)

3.What kinds of animals are used for the system?[edit | edit source] 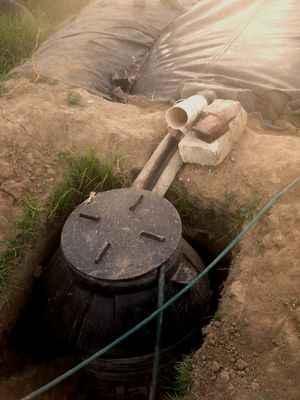 4.How long have they had the system?[edit | edit source]

System performance changes over time, as beneficial bacteria take time to accumulate in the biodigester . 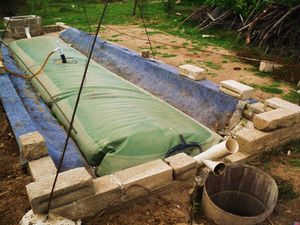 5.Is there room for gas?[edit | edit source]

Sometimes if the registro or piping from which the biol exits is elevated too high the biol is not able to leave until the biol inside is level with the piping and thus the room for gas is reduced. If the bag is completely full of waste influent with no room for gas the gas infuses into the biol producing bubbly and smelly biol and little to no gas for use. 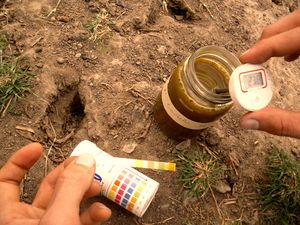 testing temperature and pH in the field 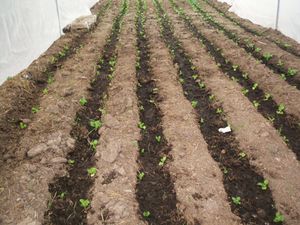 6.What is the Temperature of the exiting biol and the outside air temperature?[edit | edit source]

Remember to record the time these temperatures are taken and record whether or not the biodigester has a greenhouse or lies in a dug out bed for a partial covering and source of warmth. The inside temperature has a direct effect on what bacteria can survive and thrive. Anaerobic bacteria communities can endure temperatures from below freezing to above 57.2°C, but they thrive at temperatures around 36.7°C for mesophilic bacteria and 54.4°C for thermophilic bacteria. Both bacteria activity and the subsequent biogas production drops drastically when temperatures are between 39.4° and 51.7°C and the drop is less drastic at around 35° to 0°C.

8.Are they using the biol for fertilizer?[edit | edit source]

While systems may be functioning fine user utilization of different benefits from the system may be selective. Some users may only use the gas, while others only use the fertilizer.

9.The biol is alied to which kinds of cros and has there been a significant difference from other fertilizers?[edit | edit source]

Understanding what types of crops the biol is used for is important to assess which crops the biol may be more useful for. It’s also important to understand what types of crops the biol is used on in order to better advise users on which crops may present a health hazard for human ingestion if biol is applied during crop growth. Though studies report great reductions in pathogens of up to 90-95%, until we are able to test our own biol for coliforms we suggest that if using for lettuce and other leafy ground veggies the biol is best applied before planting in order to prevent direct contact between the edible part of the plant and possible pathogens. For potatoes or other root crops if there is a fallow season before planting.

Methane can be used for cooking, heating, and electric generation. Using and burning the gas is an essential step to actually destroying the methane. For those users who do not want to actually utilize the methane they should still be burning the methane when released from the bag to ensure that the methane is destroyed and not released into the atmosphere. Methane is a greenhouse gas that can reside in the atmosphere for up to 100 years making its effect 21 times greater than CO2. (Eaton,2009) When methane is burned it produces CO2 and water vapor following the model of complete combustion. Even if the process is producing CO2, the carbon recently came from plants and is part of the current carbon cycles fixation and release of carbon as opposed to fossil fuels which are the release of carbon from centuries ago into the current atmosphere. Also this carbon dioxide is 21 times less potent then the methane it comes from.

Eaton, Alexander. THE ROLE OF SMALL‐SCALE BIODIGESTERS IN THE ENERGY, HEALTH, AND CLIMATE CHANGE BASELINE IN MEXICO. August, 2009. Thesis for fullfillment of Environmental Systems (MS) Energy, Environment, and Society.