Beach plum, a fruiting shrub native to stressful dune habitats, has been wild collected since colonial times to make preserves and jelly. Today, jelly production from native stands is a small but thriving cottage industry in the Northeast. This project’s goals were to develop an integrated system for a sustainable beach plum industry, including fruit production, processing the crop into value added commodities, developing niche markets for these products, and education of growers, processors, and marketers. This research has helped to catalyze a new growth industry based on high value niche marketing in an at-risk agricultural region where small farms predominate. 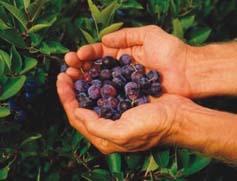 Beach plums hold a heritage appeal for many New Englanders, and New York and Massachusetts farmers are rising to the challenge. "We see it as a crop for small farms with diversified operations," said Rick Uva, a Cornell researcher.

A fruiting shrub native to stressful dune habitats in the northeastern U.S., beach plum has been wild collected to make preserves and jelly. The goal of this research was to develop an integrated system for a sustainable beach plum industry, including fruit production, processing the crop into value added commodities, developing niche markets for these products, and education of growers, processors, and marketers. Research falls into three main areas: horticultural production methods, fruit quality evaluation and processing methods, and economics and marketing.

A factorial experiment evaluating the effects of irrigation, mulch, and fertilizer on the growth and yield showed that fertilization increased growth and yield, while irrigation and mulch had no effect. This finding confirmed that beach plum is a stress tolerant crop that can be grown successfully without irrigation, even on sandy, low-nutrient soils.

Wild fruit were sampled through the species range to determine the selection potential for desirable fruit traits. Fruit ranged from 13.5-19.7 mm in diameter and was consistently high in phenolic content and acidity. The antioxidant capacity of water soluble substances of selected samples fell between 87 and 397 mg per 100 g of fruit, indicating that the beach plums are a very good source of antioxidants. 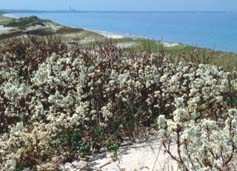 The beach plum's pale, pink-white flowers in spring decorate coastal sand dunes from Maine through Maryland, a harsh native habitat that bodes well for the shrub's success during summer drought.

In spring 2001, 15 new beach plum plantings were installed in the northeastern U.S. Plantings ranged from 10 plants to 800 (about 1 acre) with the mean number of plants/grower of 175. An additional 25 plantings were established on farms by May 2003.

1 We will contact all New England cranberry growers and 500 small farm entrepreneurs to identify early innovators desiring to enter the beach plum industry. By the end of this project, we will help early innovators plant 12 beach plum production orchards.

2 Using the project’s business plan, early innovators will mentor others. Forty new partners will be enlisted by project’s end.

Establish a germplasm collection for a beach plum improvement program; make an initial distribution of improved clones to producers.

Our approach to sustainable new crop development simultaneously addressed three key components of long-term crop success: fruit production, processing,and marketing. In order to get grower ownership of the project we distributed unimproved plants to growers. To maintain a high level of grower involvement in this project an Industry Advisory Board was formed to guide us at the project's start. We maintained that getting plants on growers’ farms and the success of individual growers who will become champions of beach plum is necessary to establish this industry. Growers were recruited for this project by our website, extension personnel, newsletters, press publicity, and grower-to-grower interaction.

Below, headings indicate MATERIALS AND METHODS associated with MILESTONES of the corresponding heading.

Demonstration and research planting in Massachusetts--Located at Coonamessett Farm, a community supported agriculture farm in Falmouth, MA, this beach plum planting has served as a research and demonstration facility since 1997. Plants are being grown in a complete factorial experiment with the treatments of mulch (4”woodchip), fertilizer (lbs./a)-- N=60, P=138 pre, K=88, pH=6.5, and irrigation (1 inch supplemental water/week). A factorial experiment evaluating the effects of irrigation, mulch, and fertilizer on growth and yield of beach plum (1997-2001) was analyzed and is being prepared for publication.

Demonstration and Research Planting in New York—Andrew Senesac at the Long Island Horticultural Research and Extension Center in Riverhead, New York conducted a trial to determine beach plum's sensitivity to herbicides labeled for use on other fruit producing Prunus species. The trial followed IR-4 protocol. In June of 2001 two test plots were planted with beach plum that had been grown from wild collected seed. Plot A was planted with three-year-old plants that were trimmed to a single stem (as a tree). Plot B was planted with first year seedlings. All plants were staked. Over two hundred beach plum plants were included in this field trial/demonstration planting.

In August 2001 fruit samples were collected from cultivated and wild stands for fruit quality analysis. Fruit samples were kept at 35°F until the analyses were performed. A total of 38 lots were studied. A sub-sample of each lot was reserved and frozen for additional analysis such as total phenolics, acid composition, and antioxidant activity. Whole fruit was evaluated for size, color and pulp yield. Juice samples for chemical analysis were produced by crushing the fruit and manually squeezing it through cheesecloth. The prepared samples were analyzed for color, pH, acidity and soluble solids (Brix).

The fruit was evaluated for size by measuring the height, width and depth of 10 randomly selected berries from each lot. The color was measured by placing approximately 15 plums into a glass holder and by taking color readings using a colorimeter (HunterLab UltraScan XE). Pulp yield was estimated by weighing the pulp and the pits manually separated using a single fruit cherry pitter. Juice measurements were performed using a colorimeter, a pH meter and a manual refractometer for Brix readings. Acidity was determined by a standard titratable acidity procedure. All measurements were conducted in duplicates.

In conjunction with other funding by Cornell University Agricultural Experiment Station Federal Formula Funds, Wen-fei Uva conducted consumer focus group research in New York City on March 13, 2002. A total of two two-hour focus groups were conducted among adults at a central interviewing facility in Manhattan, New York City on the evening of March 13, 2002. The discussion guide was developed by Richard Donovan of Donovan & Associates– a marketing research consulting firm. The discussions were facilitated by Richard Donovan and observed by Wen-fei Uva and Richard Uva.

The first focus group consisted of six adults, and the second had eight; each respondent was qualified on the following criteria:

1. He or she is the primary shopper for the household.

2. He or she regularly buys specialty, boutique or gourmet jams or jellies.

3. He or she had either bought a product made with beach plums and would buy again, or had not bought such a product but would be willing to try one.

All the respondents were between 25 and 54 years old except that one in each group was over 55 years old. All had completed a high school education, and there were two male respondents in each group. There was a mix of employed (full-/part-time) and not employed, and the spread of household income was from $25,000 to $75,000 and more.

In the summer of 2001 botanists at herbaria across the northeast were contacted and polled as to the location of significant beach plum populations in their respective states. Access permission was obtained for the various sites and in late August/early September of 2001 and a germplasm collection of beach plum seeds was made. The sites visited (Figure 1 and Table 1) cover almost all of beach plums native range. Seed and data from several plants per site were collected (142 plants in all). Additionally, fruit samples were collected and sent to the Department of Food Science and Technology, Cornell University, Geneva, NY where fruit quality analysis were performed as described above.

Demonstration and research planting in Massachusetts--The results from the Coonamessett Farm trial (Figure 2) showed that fertilization increased growth and yield, while irrigation and mulch had no effect. This finding confirms that beach plum is a stress tolerant crop that can be grown successfully without irrigation, even on sandy, low nutrient soils.

A pest management phenological calendar (Table 2) was developed at Coonamessett Farm by David Simser of Cape Cod Cooperative Extension. This has become an important tool in preparing pest management plans because it links pest activity and harvest to degree-days.

Demonstration and Research Planting in New York--Results of the herbicide trial indicate that Simazine at 1 and 2 lbs. a.i./ac. injured the first year seedlings. This test has shown that many of the materials labeled for other fruit bearing Prunus species appear to be safe for beach plum. In 2002 the study was expanded to evaluate the tolerance of beach plum seedlings to a new active ingredient pre-emergence herbicide (azafenadin) and to a new formulation of an older herbicide dichlobenil was conducted by at our demonstration planting at the Long Island Horticultural Research and Extension Center. This study indicates that these herbicides caused no reduction in plant height in comparison to the hand weeded control.