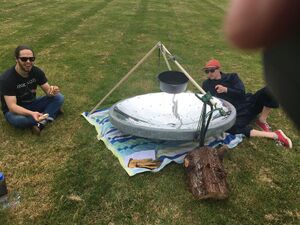 Parabolic solar cookers are designed to utilize the sun's vast supply of energy to do what we all need to do from time to time, cook food! Instead of cranking up the gas oven or turning on an electric stove, we can harness the sun's energy to focus light to generate enough heat to make food, or even distill water.

This project was originally inspired by Bart Orlando in Spring of 2018, for a class project in Appropiate Technology Course at Cal Poly Humboldt.

The objective of this project was to make a solar cooker with Bart Orlando as the client. The idea of solar cookers has been around for quite some time now. One of the biggest appeals of solar cookers is that there are no indoor air quality health effects associated with the use of them. This appeal has inspired people like Bart Orlando to try to to produce solar cookers at a scale that could be implemented into developing countries to combat carbon intensive wood burning cook stoves and other cooking methods that produce greenhouse gases as a by product.

The following Criteria will be used to assess the success of this project. These criteria were chosen based on the suggestions of the project coordinator as well as the diligent students who are working on the catchment system. The scale (1-10) represents the importance level of meeting the constraint of each listed criteria.

This is a review of the available literature pertinent to the a specific project.

The more reflective the material used for a solar cooker's surface, the more energy from the sun will be converted directly to the focal point to generate heat. True mirrors have the highest potential of converting light into heat. Reflective aluminum is another great material to use that will be about 95% efficient. However, the material is only one aspect of the cooker. Forming the correct shape so that all the energy is directed to one point is an essential aspect of the solar cooker.

The three dimensional parabola, the paraboloid, is the most efficient shape for solar cookers. Unlike box solar ovens, the parabolic shape has a central focal point where any light that hits the parabola’s walls will reflect into it. Using sunlight, the heat, along with the light, will reflect into that focal point and warm that spot. The cooking container should be located at the focal point so the maximum amount of heat will be used for cooking. With the general equation for a parabola being:

the focal point can be found by taking a point on the curve, (x, y) and putting it into the equation:

The amount of clear days in Humboldt County is the major inconvenience with local solar cooking. Arcata has around 78 completely clear days per year with the most during September and October and a monthly average of 6.5 clear days (Western Regional Climate Center). Although most days are not completely clear, there are still partly cloudy days where it will clear up long enough to cook something around midday to early afternoon. This inconvenience of weather in Humboldt County became one of our projects largest obstacles. [2]

Our design for a shallow parabolic solar cooker was made by fixing mirrored aluminum panels to an existing aluminium satellite dish and using wood poles to hag our cast iron pot over it. We took Bart Orlandos' advice and checked out the Arcata scrap yard to see if there were any dishes we could utilize. We ended up finding an old 4ft diameter and a 8 inch deep aluminum dish at the scrap yard. There are definitely some disadvantages to the dish we ended up using. It would be best if the dish had a larger diameter and was deeper. This is because the percent of area that the cooking pot shades the dish will be a smaller fraction of the total area of the dish as the diameter of the dish increases. The problem with having a shallow dish is that the dish can be a safety hazard and start fires with tall trees that are in the vicinity of the dish on a sunny day. These dimensions made our focal point be 1.5ft away from the bottom of the dish. Once we found our dish we got sheets of engineering paper that were big enough for us to draw out different shapes of our mirrored aluminum panels. We ended up choosing to go with a shape that would maximize the diameter of mirrors on the dish, but leave about a 3 inch diameter hole in the middle. We cut the mirrors with an angle grinder. The angle grinder worked well and allowed us to cut straight, but had rough edges that needed to get filed down. In order to get the mirror to stay on the dish we decided that bolting down the mirrors was our best option that we had available. When bolting the mirrors onto the dish we had one member drilling holes into the mirror and the dish, another member that was holding down the mirror and using a blow dryer to blow away metal shavings and the last member was screwing the bolts into the dish. After constructing the dish we had to go about making a stand for our dish. We used the wood poles to make a pyramid like shape above our dish by tying a knot called overlay fisherman on the top of the wood poles and then hung our cast iron pot so that the bottom of the pot is right over the focal point. When testing with the dish we used wood logs, a guitar stand and 15 feet of 550 cord to prop up the dish so that it was pointed at the sun. When testing with our solar cooker the weather became a constraint in our ability to boil water. With the weather being partly cloudy when we tested we were able to heat our water to 123.5 degrees Fahrenheit.

This budget is an estimation of the monetary costs anticipated in the construction of a parabolic solar cooker.

From an appropriate technology stance, solar cookers are not very ideal for the Pacific Northwest Region. The reason for this is that the amount of sunlight in a given day is typically very limited as it is generally mostly overcast. This exactly happened when we tested our solar cooker. We tested the cooker at 1:00pm on May 6, 2018 with it being sixty degrees and partly cloudy. Once we put our liter of water we were testing with into the cast iron pot we were able to get the water to 123.5 degrees Fahrenheit. This was only a couple of minutes into our testing when the sun we had over head in the sky became covered up by heavy cloud coverage. Cloud coverage like we experienced when testing with our solar cooker impedes the ability for solar energy in the form of sunlight to reach the solar cooker and generate enough heat to boil water.

Page data
Retrieved from "https://www.appropedia.org/w/index.php?title=Bart_parabolic_solar_cooker_2018&oldid=669604"
Cookies help us deliver our services. By using our services, you agree to our use of cookies.
Categories:
About Appropedia · Policies · Contact · Content is available under CC-BY-SA-4.0 unless otherwise noted.